yesterday was a good day

in which our plucky heroine keeps busy, warm, and well fed...

Tuesday this recipe turned up in my Instagram feed, and it looked so delicious I decided to try it... However, riding my bike to the grocery store in the bitter cold wind turned out to be less than ideal, but I was able to get as far as Green Zebra, which thankfully has a small butcher counter, and had chicken wings.

I made a few changes in the recipe: first cutting it in half, since am not feeding a whole family, and using my own plum sauce* instead of hoisin sauce, using my Awesome Sauce instead of honey (because sweet and spicy) and some garlic granules instead of fresh garlic, because I am so not going shopping on my bike out in the weather feeling like I do. 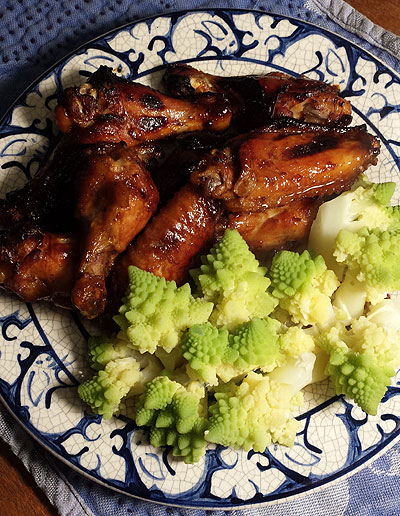 Baked it in the convection oven with plans to eat it for dinner, and save some for lunch, along with steamed romanesco broccoli. I call this a win! The wings are so delicious that it will be hard was impossible to not eat ALL of them!

※※※
this is a most clear and useful explanation...
※※※
Yesterday I took refuge in the workroom and turned on the kiln... time to start working on some of the enameling projects in my queue, and incidentally enjoy the side effect warmth of running a 1500F oven. Martin's Laurel medallion had a tiny surface chip, acquired somehow in the years he has owned it, but as I expected, once I removed it from the setting, the chip was actually a crack that went all the way through, and the broken enamel fell away from the rest of the piece.

Because the chip was still all in one piece (as visible here), I first decided to try simply re-fusing it to the surface in the exactly matching gap... while it did fuse, it also began to ball up into an irregular lump at the same time. That required that I grind that small section level and gradually fill in the area to match the rest of the enamel... On the newly repaired enamel, the formerly missing area is now indistinguishable from the rest of the surface 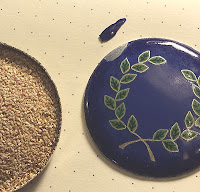 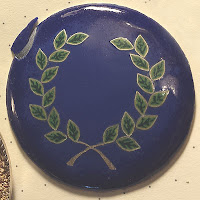 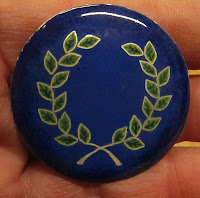 After careful examination of the enamel, and making several samples of the opaque blue enamels I currently have on hand, it became apparent to me that the base color of dark blue is probably 1660 Ultramarine, of which I have only an empty jar currently, and the darker edging is Cobalt. I have ordered some replacement 1660, since it is a Most Useful color.

Apparently whilst I was initially creating this piece of regalia, I must have run out of the ultramarine, and decided to thicken the edge with the slightly darker cobalt, to a most pleasing effect. Indeed, I am very pleased with the detailing on this piece, both the subtly darker border, and the delicate painted leaf veining. I only ever repair enamels I myself have made, and I can count on one hand the number of such that have come back to me over the years... Glass on metal is both fragile and durable; it is vulnerable to being cracked, but also can last for hundreds, even thousands of years...


* One of my kitchen tenets is to put effort into making high-flavor condiments that can then be used to add savor to simple meals throughout the year; plum sauce takes the place of things like ketchup, and hoisin sauce, and if homemade, has no weird ingredients that require a chemistry degree to decipher, just things like tamari and garlic and vinegar and cayenne, and plums...


Chinese Plum Sauce:
recipe can be multiplied
Posted by Alison at 9:40 AM