in which our plucky heroine perserveres...

I had to/chose to go outside. NOAA forecast for rainshowers 100% tonight and tomorrow. Before the smoke rolled in last week, I removed the damaged lower trim around the east-facing window, leaving empty space where the rotten wood had been (the plan had been for Mr Dawson to come down here and repair whatever needed to happen, but what happened instead was Hazardous Smoke.)

I was outside for probably 20 minutes, had carefully planned what to do beforehand, to fill the gap using those foam pipe insulating tubes, and use duct tape to seal it to the edges... which seemed to work pretty well as far as I can tell, I don't want water pouring into my house walls, eh?...

Came indoors, clothing off and in washer, drink a glass of Emergen-C (potassium ascorbate (1000mg vitamin C plus b vitamins and electrolytes) and immediately into shower) Oh, and I'd tripled up my masks, for extra filtration. As Bill Dawson said this afternoon, when I called him for advice re window... "I was positive I signed up for the non-smoking section of the end of the world...."
※※※
~ 100 day creativity challenge - day 54 ~ 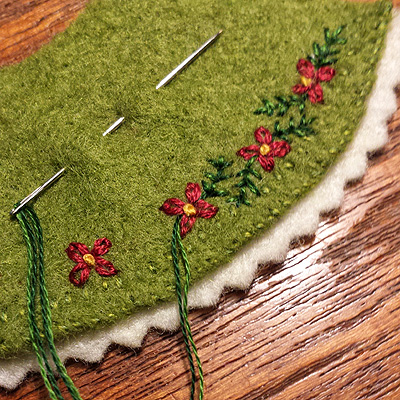 week three of the Tiny Rag Doll challenge, and this time it is to "create some sort of Bottom/Skirt/Pants..." I decided to take some closer looks at some of Salley Mavor's decoration techniques (which are what is inspiring this two month challenge and her book which is the random prize drawing at the end), and was charmed by her tiny decorative embroidery, and by her use of pinking shears to add additional details. I’ve started on a new skirt for Nandina, again using what felt I have on hand, and assorted strands of DMC embroidery floss...
※※※ 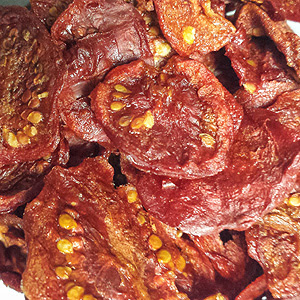 some of this years tomatoes were run through the food dehydrator as an experiment. They are pretty, but the experiment shall not be repeated.

Even after removing their skins, they are still not my idea of a real treat, though they will surely be a good addition to wintertime soups. And tomatoes contain a lot of fluid, which required frequent attention to the dehydrator lest the lower level overflow into the machinery!
※※※

September SMART goals (x=extra)
today's gratitude -  I have multiple masks, which made HAVING to go outside in the smoky bad air a little less awful...

Posted by Alison at 9:56 PM No comments:

in the catbird seat, sort of...

in which our plucky heroine remembers a childhood visit to the zoo in Central Park...

The colors outside initially looked a bit more like an ordinary misty moisty morning, the sort where several miles of walk along the bluff would be delightful, but the haze obscuring the street and easing my eyes is not water, but toxic smoke, and as the day wore on, the colors resumed their jaundiced tinge. I can take no more than ten steps in any direction.

"why the smoke situation is not improving..." 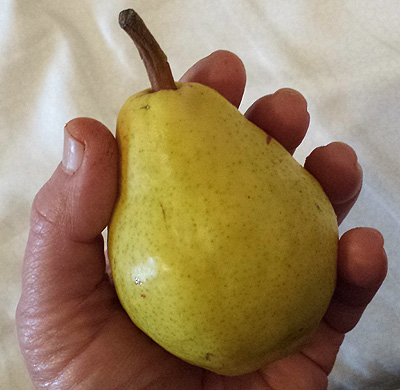 I picked alley fruit back when walking around outdoors was still possible. Alley pears will ripen in the refrigerator, very slowly, but they will gradually turn from green to yellow. I suspect that then a day out of the fridge would be of benefit. Pears are odd. They must needs be picked fully grown but still green, and finish ripening off the tree for happiest human food. Pears tree-ripened have lots of gritty "stone cells", which are much reduced if they are picked before fully ripe, and allowed to ripen off the tree... weird eh?


This might be one of my two favorite songs ever... it hit me like a hammer in the middle of my chest and I started sobbing, sitting here in my little cottage with the doors taped closed.
※※※ 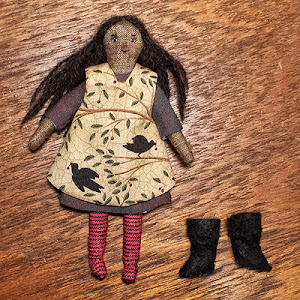 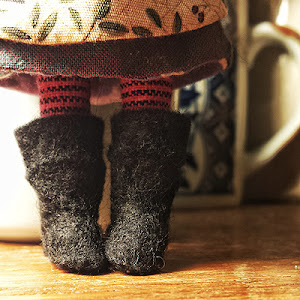 A small improvement for Nandina's boots... using some of the original felt, I filled in the front opening, and added a horizontal band at the top edge. This keeps them more securely on her feet, than the first iteration, which had front opening slashes and were more like ankle boots. To get a better sense of the scale of the boots, they are just about an inch tall, Nandina is just over 5" tall...

※※※
When it is once more safe to attend to assorted house repairs, one thing that will happen is better weatherstripping around the external doors. For right now, masking tape is sealing the back door closed.

※※※
September SMART goals (x=extra)
today's gratitude - Today I am grateful for my pet kitchen worms. I have been keeping a little indoor worm bin for years now, as an adjunct to my outdoor compost bin. They eat my kitchen produce scraps, which has become extraordinarily important the last week, when going outside to the compost bin has become impossibly hazardous to respiratory health.
Posted by Alison at 3:11 PM 2 comments:

in which our plucky heroine has an old question answered...

All those instances in past years when (in response to various and sundry troublesome incidents) the saying "what doesn't kill you makes you stronger" led me to reply wtf am I going to need to be so gorram strong for...  I had thought that my cancer journey was the answer when it came, but now it seems that was only a rehearsal.

The reality we are in now feels like the sort of apocalyptic SF I gave up on reading decades ago, the sort of stories that end without hope. None of them included it being too dangerous to even be any closer than six feet to our cohorts. Perhaps, somehow, we humans will learn the lesson (cooperate or die) to heal ourselves and our planet, so that our species can continue to exist

※※※
Last night I went to bed, and the AQI had risen to 618. Which is basically off the chart. Overnight went to a high of 688, and currently at 472 is still deep beyond "Hazardous - everyone may experience more serious health effects, everyone should avoid all outdoor activity". I've not been outside at all in three days.

※※※
today's gratitude - I am alive, my relatives and friends are mostly all still alive. Where there is life, there is hope.


"Hope is a discipline, Mariame Kaba said, and it matters most when it's hardest. Right now it doesn't mean envisioning rosy futures; it means knowing that the worst case scenarios are not inevitable, and every day we are choosing together what direction we head in."