in which our plucky heroine admires cleverness...

When I saw this, I just couldn't help myself from talking to the person toting their groceries about it... They made it from a rattan cane inherited from someone in their family, a basket found at a thrift store, and some hardware and lumber.

I have often thought that something like this would be ideal for toting things around at SCA events, as a basket would be less obtrusively modern than my folding chrome luggage-toter. Acquiring a suitable and sturdy basket would be the big challenge, the rest is pretty much within my skill set. I would probably create a slightly different handle, and make it detachable from the basket, so as to make packing and transport to events easier...

in which our plucky heroine pounds rocks...

Last month I was able to travel up to Mud Bay and spend a few days working with my friend Mr Dawson, trying out various new-to-me techniques and tool use. He has done rather a lot of research on ancient technology of metalwork, among his many accomplishments. I was pleasantly surprised at how well these Bronze age tools he made worked for adding texture to wire.

The stone anvil and hammerstone were a pleasure to use, and the bronze die, cut with regular grooves, was self-aligning when in use, so the wire texture was even and smooth. Our forebears were doing good work with the materials they had available...

Today's gratitude - The generosity of professional colleagues... I have learned more from my friend Bill, over the years, than I probably learned in college

Posted by Alison at 8:13 PM No comments:

in which our plucky heroine drifts away on a tide of sound...

today's gratitude - the albeit temporary delight of having access to a world of music and visuals as never before on the planet, and that I have friends who share the bright beauty that they find. Thank you Ariadne for sharing this with the household!

Posted by Alison at 9:13 AM No comments:

in which our plucky heroine considers class markers and social shifts...

This essay "Kondo and the Bibliophibians" makes some fascinating and valid points, and ends up nowhere near where I expected when I first started reading. 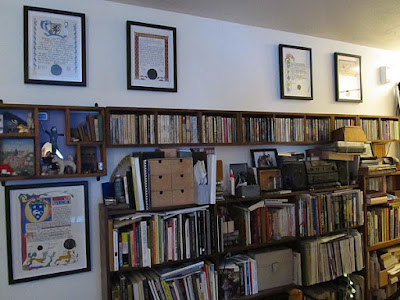 This is my own hallway, though rather a mess in the middle of a reorganisation/decluttering session two years ago. The hallway here is my primary "library" zone, and aside from the small upper shelves of paperback fiction, the rest of the shelves are almost all reference books of one sort or another.

today's gratitude - the roof over my head, the bookshelves of reference and entertainment, and the people I've never met who nonetheless give me much to cogitate.
Posted by Alison at 9:59 AM 2 comments:

in which our plucky heroine uses the interwebs like the old fashioned "wish book"...

Way back when rocks were soft, the Sears catalog holiday supplement was intended as a mail order treasure chest, full of gifts for adults and children. While I don't want a fancy doll, or an air gun, or a new set of dishes, nowadays I often find things online where someone has come up with a clever idea to solve particular workshop challenges...

This riveting system, which as far as I can suss out consists of a machined holder for a cleverly bent nail set, and a spring loaded center punch with a customised head, that together can be used to drive the tiny rivets properly in spaces hard to access otherwise.

in which our plucky heroine considers the fungus among us...

Ive never seen these growing in the wild, though I have seen Aminita muscaria

Mushrooms are a bit of a design motif this year (for me) as I have chosen several mushroom print fabrics for garment sewing... I've made a cotton blouse in a brown-and-cream print, I've plans for a knit top in this pale turquoise jersey with multicolor mushrooms, and this denim Cotton + Steel japanese knit is probably going to become a new turtleneck for next winter...

Would it be overkill, do you think, if I were to also create a mushroom stencil for an Alabama Chanin style knit top???

today's gratitude - the memory of assorted mushrooming adventures, including finding edible brain mushrooms on a neighborhood walk with Bill years ago, a chantrelle hunting adventure with Rois and Chance before they moved over the hills, and the one time I found a whole backpack full of morels growing in the bark mulch outside University Hospital in Seattle!
Posted by Alison at 8:57 AM 1 comment:

in which our plucky heroine revises plans...

Remembered yesterday that Mudcat said we could do no more than two handknits to include in SWAP. I've been planning to make the "Ursa" cropped pullover ever since it showed up on Instagram, and I have the perfect yarn, a deep almost black overlaid with multicolor teal/turquoise (it reads as a kind of very dark indigo) Knitting is something I can carry along with me and work while I am riding transit, which gives me a lot of fragmentary and otherwise wasted time to create a garment. That would give me two different outer layers to wear with my SWAP.

If I plunk the pullover into my INDIGO section, and sub in a RTW turtleneck in the BROWN section (instead of cropped leggings) I will probably be able to find time to stitch up the one remaining sewn garment, the popover dress. Given that we are moving into warmer weather, a popover dress will be more appealing by the end of April than leggings for warmth!

- PRINT
9. taupe/multicolor feather print knit top (done)
10. brown/cream mushroom print shirt (done)
11. indigo/multicolor floral print blouse (done)
The other garments that have been dropped from the SWAP queue will turn up in my summer or autumn 6PACs, just as my formerly sewn garments like my Alabama Chanin cardigan from last year, my brown flannel blouse, or my batik everyday dress, also coordinate with my SWAP this year... Deciding way back to have a limited color palette was one of the best choices I have made.

in which our plucky heroine notices signs of spring... 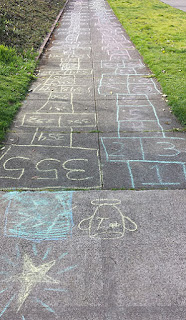 The neighbor children make the most amazing chalk art... this time it is The Long Hopscotch! which goes all the way down the block, turns 180 and comes all the way back again...

it is, among other things, pollen season...

the first ladybug takes a stroll on the forsythia bush, and the star magnolia coming back after being winterkilled two years ago 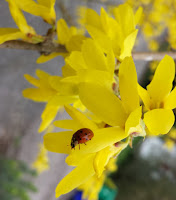 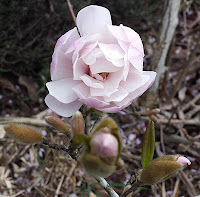 ※※※
Earlier at the end of March, I finished the new brown babycord pinafore. The corduroy is so very thin and soft that while it won't be durable, it will be a treat to wear in the springtime. I played around with the nap direction, and cut the skirt gores in a way that created small triangles of reversed nap at the bottom edges, just for fun.

※※※
The best project, however, is my new homemade daypack from materials gifted, salvaged, and scraps (except for purchased interfacing)... I liked the looks of the Range Backpack pattern by Noodlehead, and it was worth getting the pattern since the instructions were really clear and there was not a bit of faffing about with tape and paper, since all the component parts were measured rectangles. 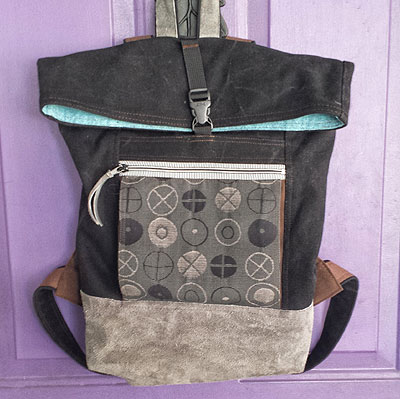 Being my usual self, I had to make modifications. The initial inspiration was the fragment of Eames motif tapestry fabric just big enough for a front pocket, and my design choices spiraled out from there. Extra heavy black denim for the body, and as backing for the brown webbing shoulder straps. Heavy brushed brown twill for the strap attachment points, and to create folded expansion gussets on either side of the zippered pocket; (there wasn't enough of the tapestry fabric to do a center folding expansion)

Some salvaged grey upholstery leather was used sueded side out for the pack bottom, as an accent on the carry loop at the top, and a thin strip as a zipper pull. The splendid stripey zipper was a gift from Shams. I lined the pack with heavy turquoise/black linen cotton chambray. The snap buckle was salvaged from an older worn out pack.

I decided on fixed length shoulder straps, since I basically never adjust the length on other daypacks, which meant that I didn't need to find all the adjustable buckles and connectors for making the straps longer and shorter. (same same as with bra straps... if you are making your own, why do the straps need to adjust?? I've never understood that, with manufactured items it makes sense, because bodies are varied in configuration, but if I ever try the DIY route, no dumb little sliders) But I digress...
The daypack is a Grand Success, and it is tempting to make another one at some point, if I can salvage some more of the click buckles from somewhere. (I really miss Rose City Textiles and their room of outdoor notions!)

April SMART goals (x=extra)
Today's gratitude - the sweet scent of springtime flowers, and the drifts of pink petals from the ornamental plum, that fall like snow, but softly, and not cold
Posted by Alison at 10:18 PM 2 comments: