it is what I do... making a custom piece


As making custom pieces is probably our plucky heroine's favorite thing to do, it was really delightful to collaborate with J. The custom rune pendant, a project that began several months ago, was just finished up and mailed out today.

This is a bit about how the process worked... I started with a series of sketches, the only caveat being the particular motif, the small size (1" x 3/4") and the colors blue/orange/gold. Not sure what kind of look they were going for, I offered an assortment of styles both pictorial and geometric: 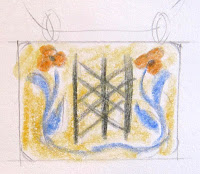 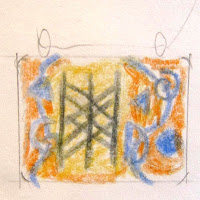 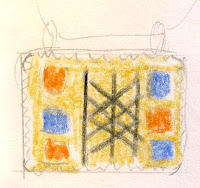 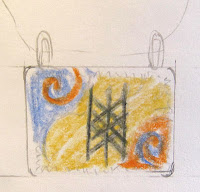 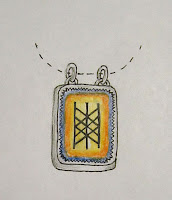 From all of these, the choice was for the simple elegant "bands of color" outline, which was my own favorite as well. Given the scale of the enamel, my plan was to use limoges painting enamel techniques for the rune motif, as it allows very fine detail.

I then did a more finished rendering, to clearly show what I proposed to create for them, a small rectangular enamel set in silver

In order to translate the sketch into a finished enamel, I needed to test the various orange enamels on hand, since that color is pretty much never used in regalia. I wanted to get as close a match to the sketch as I could... 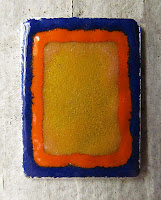 None of the opaque colors looked right as a background for the center section, so I chose my old friend "Thompson's Tea Rose", a venerable pink that turns vivid gold when fired on silver.

My first effort at creating the borders, the outer blue strip, while not a dark cobalt, looked much too dark compared to the warm orange and gold. By using wet-packing the enamel directly, instead of using cloisonné, I was able to get an effect of soft borders, rather than hard outlines, which really suited the design. 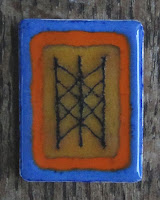 After some additional email consultation, the dark blue was replaced with a lighter color... much better visual balance. Adding the detailed complex lines of the rune (just over 1/2" tall) was a real challenge; I think it took at least six firings or more for the motif to have all the details even and tidy.

Finally a simple silver pendant setting was made to fit the enamel. I use serrated fine silver bezel wire to hold the enamel in place, as the malleable pure silver, combined with the serrations, is the most gentle way I know to hold the enamel in place securely. I decided to use some spiral twisted wire for the pendant bails, and made them large enough to allow for various kinds of chain or necklace to be used with the pendant. 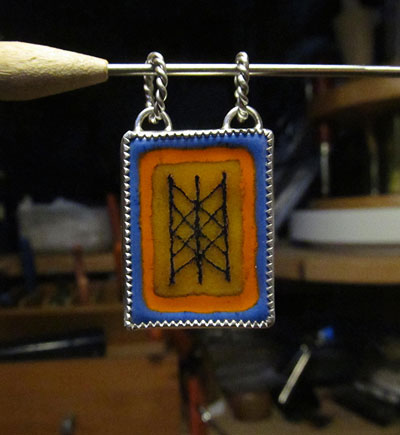 I can only hope that 2017 will allow me additional opportunity to create durable, wearable special artifacts of beauty for people...

a bit of breathing room


in which our plucky heroine is grateful for a chance to spend time with friends...


Last weekend was An Tir Collegium, a new educational SCA event, which was held in Pasco, WA.. I had already decided to attend, but not do a presentation (I was honored to have been asked, but my travels earlier this autumn precluded my also having enough prep time for a lecture and handout/bibliography). It was definitely useful to see various ways that other folks put their presentations together, and I have ideas for what I can do next time. A very nifty innovation was that the site token for the event was a tiny thumb drive the size and shape of a credit card, with all the handouts from the event, so that even for the classes (there were nine tracks, some with six or seven classes each) we did not attend we still got some data.

while traveling, we stopped both outbound and return at Maryhill Stonehenge... I love this view (two states and the Columbia River between) 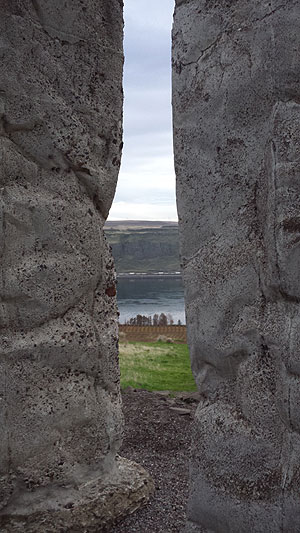 The view in the opposite direction. I'd never been here before at this time of year, and the bits of autumnal color were a delight. Plus windmills. I love the windmills. 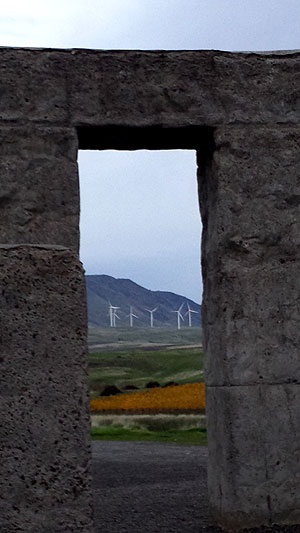 Driving across eastern Washington on the way home, the power lines formed a cohort of giant electric cats marching alongside the highway

Back at Stonehenge, the day was heading towards sunset, and the sky was much more dramatic 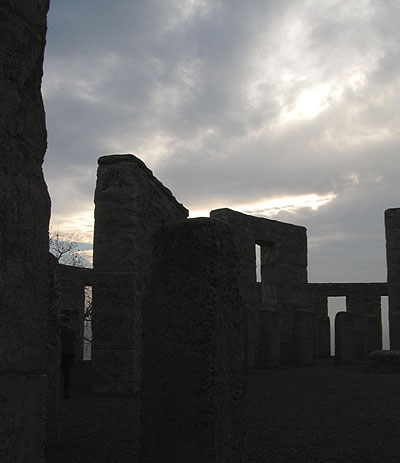 And, my excellent traveling companions... Marya, Ursel, and Mea 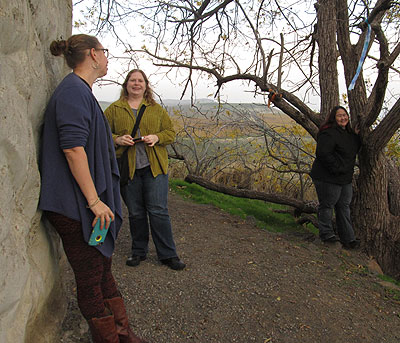 :::
Alas, I think that the cold, that I have been attempting to fight off since the weekend, is winning... I feel like crap, and a return to bed is seeming more and more like a good idea. I am too wobbly to keep trying to solder bezels. Seems like every time I stay in a hotel I come home sick... time to go put the chooks to bed and then do the same for myself


in which our plucky heroine breaks the rules...

I almost never bring trinkets home, as the last three years have been all about letting go of what is no longer necessary. But I could not resist these two small Japanese Akita-Inu figurines, who somehow ended up on the Goodwill holiday shelf. They are being added to my permanent collection here at Acorn Cottage. No, I was not born in the Year of the Dog, but I have been looking for some little sculptures just like these for a long time. 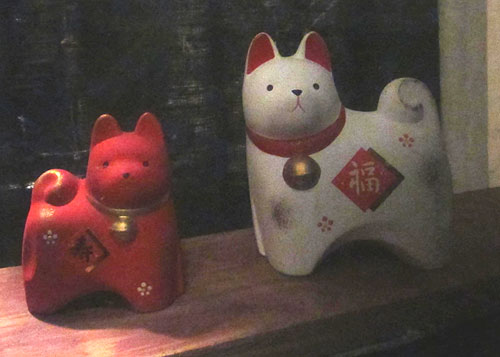 These are about two and three inches tall. I have read that little Akita figurines are sometimes a gift in Japan to parents of newborns, for good luck, and to convalescents as a wish for speedy recovery... not sure how true the info, but I liked the sentiment.

SWAP plans and assorted other thoughts


“It’s not as easy as that,” said Summer sadly. “I can’t stop myself from worrying.”

“You’re human,” said Glorious. “Humans hoard up their fears as if the world might run out.” He huffed a laugh. “Still, you build cities with them—and towers and artworks and families and faiths. It seems to work for your people, even if it would not work for mine.”

“That is a very sensible wish,” said Glorious. “But even Baba Yaga cannot grant you that. So you will simply have to be a brave human.”

Ursula Vernon posted three new chapters of "Summer In Orcus" yesterday... as she said "...because we need comfort right now. It's not much, but it's a few thousand words you can spend among friends, and hopefully give your heart a brief respite." 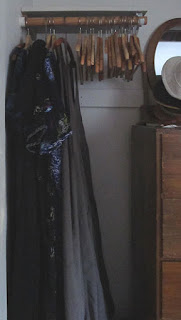 and because whatever the larger world is doing, bodies still need clothes, I am, in between the needs of working, and house declutter and organise, planning and sewing some clothing to refurbish my Very Empty Closet. I've taken the quarterly online challenge of 6PAC sewing, and the annual SWAP (Sewing With A Plan) challenge, over on the Stitchers Guild message board as inspiration.

The wardrobe planning I did last week has turned into a list of 27 garments. While this sounds like quite a lot, most everything I own as everyday clothing is quite worn and threadbare, as I've done precious little sewing for self in the last three years. I have learned over time that after about three years of wear, my clothing mostly becomes too worn to mend, so I need to either be gradually sewing a few new pieces every year, or need to plan and carry out a massive sewing intensive... 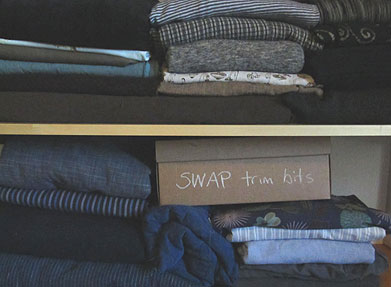 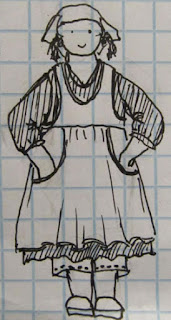 WARDROBE PLAN SEWING
:::
Though I am sickened and terrified and grief-struck, I figure the most radical thing we can do is to continue to live, to stay here, to do whatever small individual things are possible to shift things back to a more positive inclusive place, a place of hope, and even though I feel no hope today, to continue to create the world I do want to live in, where everyone has a place and enough...

These ideals got me through my cancer journey, and will hopefully continue to serve me well... I do know, however, that without both luck and public assistance, I wouldn't be here alive now to write these words - If I hadn't been in the 10% who made it through the OHP lottery* in 2011, I would have died of cancer in 2012

"Ohana means family. Family means nobody gets left behind.... or forgotten."

:::
November SMART goals
:::
* For most of my adult life, as a self employed artist, I have had no health care insurance coverage at all. When I moved to my current home, I found out that technically at my income level I was eligible for the OHP, the state health insurance for low income folks. The catch was that there were far more people that needed that coverage than there was money allocated. So every year or two, as funds became available, you were allowed to sign up to be in the lottery for whatever additional places were opened up. The year I "got lucky", there were over 10,000 applicants for just 1000 places. The next year I was diagnosed with cancer. I wish we were not the only first world country that refuses to provide universal health care for its citizens, and I grieve for all the precious lives needlessly lost because access to care is refused.
Posted by Alison at 10:57 AM 4 comments:

whistling in the dark


An analogy: Right now I feel inside about like I did in 2011, when I got the call from my then doctor that results were not benign, but a probable indication of cancer... Irrespective of whatever came next, my life was changed forever and though there are ways to (possibly) survive, there will be damage done that can never be healed, but only learned to live with. With good fortune, survival may be possible, but at great cost irregardless. No way around it but through. Our plucky heroine was both determined and fortunate* to still be here writing and creating... my strongest hope is that we, the nation, and the world will also find a pathway forward... I am grieving for all that will be lost in finding that pathway, just as I grieve incessantly for all that cancer took from me...
Posted by Alison at 9:22 AM 10 comments: