in which our plucky heroine, while still lame, thinks long thoughts...

I am grateful that I first encountered U Utah Phillips (decades ago when I was an impressionable 17 year old student) telling his stories in the back room at Smokey Joes Cafe, and had the great delight of hearing him perform several times over the years. Story and song are a place where history is kept alive, and education doesn't only happen in a classroom...

Labor Day here, not just a shopping opportunity, but a holiday off from everyday work, created by the labor movement, (and gradually officially adopted) towards the end of the nineteenth century, as a day to honor the contributions of the working folk, all who labor to get the work of the world accomplished, and to remember that together we are strong.

For all who worked and sang and died... we don't forget. Friday fragment - brought to you by the letter A

A is for aphorism, and A is also for apple... The fruit on my backyard apple tree is ripe now. Every day or evening, more of them get knocked off the branches, I assume by the squirrels, so when it is time to go feed the chooks, there is a fresh dappling of red on the ground. I never thought about the literal sense of "the apple does not fall far from the tree", until I saw it with my own eyes, in fact, gravity pulls them directly downward, and were they to all fall, they would show the extent of the fruiting branches, in the same way that the saying suggests as a rule of thumb... 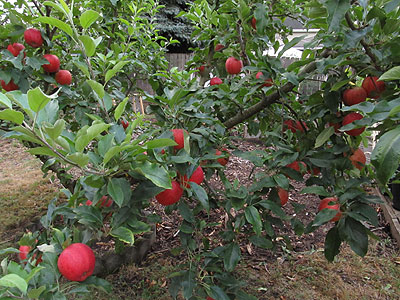 The one side of the tree is quite productive, with an abundance of vivid red apples almost the size of my fist. This is the first year of really successful backyard apples, they are sweet and tasty and not all full of bugs (which is saying a lot, since I neither spray or water the tree, and didn't manage to cover the baby fruit with the nylon footies in time either). 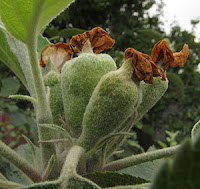 The other side of the tree is a different story, obviously a different variety, and only set a few apples this season, most of which were badly sunburned or something? before they ripened. That side of the tree is also the side that began blossoming in August, and has now attempted to set fruit twice in one year! I will consult with Mr Dawson about possible ways to either help this half of the tree regain it's senses, or how best to prune away the confused and unproductive portion without damaging the rest of the tree. Always more to learn...
Posted by Alison at 7:03 PM No comments:


It has been a rough week, as our plucky heroine attempts to deal with a sudden bout of bursitis in my left Achilles tendon, which has been making all movement intensely painful. I always forget how much energy being in pain takes, and am quite grateful on a daily basis that I am not Always In Intense Pain.

Fortunately I now have insurance coverage, and have been able to get some medical diagnosis and a referral to physical therapy. All this would have been impossible only a few years ago. Unfortunately the recovery will be fairly slow, but hopefully successful, as I am compliant with doing what I can to increase flexibility and strength and decrease inflammation... 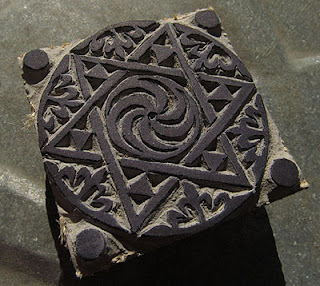 Took a few extra hours over the last week to carve another interstitial 2" sq lino block. I was inspired by this article which showed a 13th C Armenian carved marble tombstone.

I think this block will be useful both to fill in between larger motifs, to use as an occasional decorative detail, and to also create an overall pattern. After trying it out on paper, as shown below, decided to remove the corner dots, which were an experiment on my part. I had hoped that the intersecting corners would make a nice pattern, but they were more irregular than I realised, and also too visually heavy. If it seems like an even tinier interstitial pattern would be useful, can always use the tiny blocks I carved earlier this year. 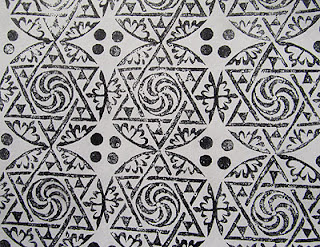 :::
I rarely go see films, but couldn't miss the chance to see this on a big screen... Kubo and the Two Strings was even better than I hoped... it is going on my short list of films I would watch again. Worth going to see in the theater, on a big screen. Worth supporting Laika, which is our own local stop motion film studio headquartered in Hillsboro. Go see this film, you won't be sorry. Tears, laughter, and some amazing animation!!!

:::
So August, with the big push to declutter the workroom, really brought the THINGS GONE column to a much more pleasing total for the year. In addition, I forgot to include giving away the old wooden windows, which had originally been intended for a creative wall treatment involving replacing all the window glass with mirror glass, which I decided didn't actually seem like a project I wanted to take on. And forgot to include that I switched out the embroidery on the Viking purse from the twin palomino ponies to the Birka style metal lace horse, set with mica, that is intended to refer to my heraldry (in a subtle way) while actually using period techniques. So two things for September that are carryovers from last month...