I miss Franchesca. She was the massage therapist that I found here in PDX, who was willing to swap hours for hours, and actually lived fairly near me. Even better, she also grew up in New England, so that bridge of common ground helped us connect. Unfortunately, she moved back east at the end of the summer, and I've been too busy to seek out another trade... why this matters is that I have been busy with the continuing effort to rehabilitate Acorn Cottage, and my body is feeling the strain. A bright spot was the wonderful foot massage that a friend gave me last week; the intractable knot in my left foot is gone, and has stayed gone! Walking without pain is a good thing, and the 95 pound compact Akita is happy that walkies are now back to the way they should be.

Yesterday I decided that it was time to stop struggling with the tearing-apart-old-pallets to get the materials to build a wheeled platform for the washing machine. Those old pallets that I salvaged were put together with spiral nails! I'll use them to extend the compost bin, cos they just don't want to be dis-assembled. So I headed over to one of my favorite stores, "Mr Plywood" (just have to love their goofy retro logo), and actually bought new material, they had some 50 cent triangular bits perfect for corner gussets, and some short boards that were actually the right size for the framework, and I had them cut a piece of 3/4" plywood to the exact size I needed...It seems so extravagant, I've been really good about using wood from the Re-building Center for my projects,...but...I've been struggling with this particular project for weeks now, and with the pieces all the right size and shape I put together the platform in about four hours. Now I may be able to get the washer back into the house before the weather turns frosty, and I can cross this off my to-do list!

The interior window trim is coming along nicely, and I'm thinking about moving ALL the craft and art supplies into the workroom, which will give me a better visual idea of how much storage is REALLY needed, and give me a more serene home again. Last week I put together an Ikea shelf unit to be a temporary replacement for the pantry, and moved the bookcasefull of food out of the kitchen, and the picnic coolers, and the canning jars and kettle. This cleared out the north wall of my tiny kitchen, and it is amazing how much difference that made. Immediately more peaceful and spacious.

Sunday I went to a planning meeting with several artist friends; we are going to have a holiday gift sale, with all kinds of amazing artistic creations, on November 30 and December 1. Stay tuned for further information...
Posted by Alison at 11:06 AM No comments:

Perhaps this is some kind of weird mental side effect of the wasp sting medications I took earlier this month? I have been having very bad nightmares for the last week or so, something that hasn't happened for years, and with very different content than anything formerly seen in any of the dreamlands that I commonly frequent... nuclear mushroom clouds, fire explosions, and a kind of terrifying nowhere to run sensation... given the content, the dreams seem to be related to the upcoming "disaster-preparedness exercise". Last week I accidentally heard part of a radio broadcast that was talking about how easy it would be for the imaginary exercise to be (purposefully) not imaginary. For some reason, I found this idea completely terrifying, and have been completely unable to regain my normal equanimity. Paranoia is definitely not my everyday mindset.
The one person I spoke to about this merely said that "well there are wacko editorials on the radio, that kind of thing wouldn't happen..." So, I'd welcome any hints as to how to move my thinking about this to the same level as, say, the way I think about major earthquake hazard, as opposed to the constant frantic mind-wheel-spinning that is my current state of mind. And just in case the dreams are true-dreams, I am now and have always been consciously grateful for the incredible blessing of friendship in my life. Love you all...
Posted by Alison at 1:08 PM No comments:

For those who asked, here is the picture that lives on my virtual desktop, (minus all the shortcuts and files) I think it looks like one of the Pauline Baynes illustrations of Tolkien, but it is actually my friend Heidi, just before her wedding. She rode up to the ceremony on that very sweet Fjord mare.
Posted by Alison at 12:27 PM No comments:

said I going to a party party

Well, I'm back from my Saturday jaunt north, to deliver the balance of the sewing I've been doing for Jen, and the corner flashing, which was unavailable in Olympia, that I picked up for their current house maintenance project...intended only to daytrip up to visit the Menagery, though Bill's (low-key) birthday festivities were for the whole weekend.

Ended up deciding to stay ovenight and drive home in the AM, as there was promised art project time after dinner. Well all who know me know that I am rather hopelessly fond of just such things...

The delivered sewing fit well, and I came away with more sewing to do for Cathy. We took a trip to the Coop, which had young! organic ginger in the produce case. I've been looking unsuccessfully for such hearabouts in PDX. Now I can move forward on the canning japanese-style pickled sushi ginger project; I have purple shiso growing in one of the planter boxes, and that herb is what is "supposed to" give the sushi ginger that lovely pink color, so this week I'll be trying out a new recipie. If it works well, I'll post the results.

We then returned home to cook various dinner and dessertly things; BIll had asked that he not have to cook his birthday dinner... Jen made a delicious spicy potato and bacon soup, which we had with some of the heirloom tomatoes from the hoop house in the backyard. There were more different kinds and colors of salt on the table than i have ever seen anywhere. Cathy made an apple crisp, I tried applesauce pudding, and Jen made an apple cake with plum and ginger bits studded throughout. Add a bit of vanilla ice cream, and a tasty dinner was had by all.

The art project turned out to be oil painting. Bill is a quite accomplished painter, and has had paintings in various gallery shows.His website has images of some of his paintings I've somehow never in all my years even tried oil painting, and now have not only a much greater appreciation of what it takes to do well, but have discovered yet another way-too-much-fun medium. It is just as addictive as knitting, or beadmaking; we all ended up painting till after 1 in the morning! Here is the little picture that I came home with... 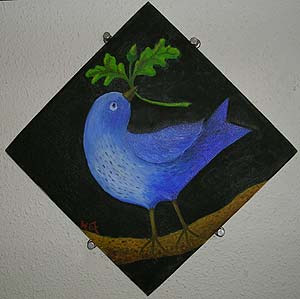 Unfortunately I could not justify spending all day Sunday up north also, though the plan there was to fire up the big brick outdoor oven over at Blue Heron Bakery and bake pizza in the evening; the plaintive call of Acorn Cottage and my two hens drew me back home.

And just for fun, here is a picture of the Japanese anemone blooming near my front door: 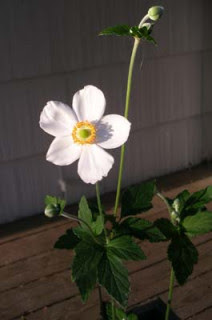 Posted by Alison at 3:26 PM No comments:

not gone, not forgotten, just gradually ramping back to what passes for normal for me...

Ten days on Prednisone is no picnic. Hopefully the dizzyness and falling down and disrupted sleep will continue to diminish, (the hens found my slow collapse into the last remaining twig fence very interesting: as in can we get past her to get to the place where the chicken food comes from...). My right hand is looking like itself again. I am cleared again to for tool useage, which will help with the current state of Acorn Cottage.

Yesterday I managed to attach one set of casters to the bottom of a (found the right size) wood pallet, which will hopefully hold the dryer. I need to construct a pallet for the washing machine in the next few days. Then they both can come back in the house from their vacation in the carport. As the weather has shifted back to dampness, I need the carport for Nimblefoot, the slightly-leaky station wagon.

I'm still thinking about hosting a social/crafty evening on Monday nights, and rather than waiting for the house to be re-constructed, I just say lets do it anyhow. So Monday from say 7 to around 10..

I'm off to Ikea this afternoon to look at possible shelving for the workroom...
~~
Having spent the last several hours wandering about Ikea, and thinking about what options will give me the most bang for my miniscule buck, I decided that constructing a temporary replacement for my beloved pantry cupboard would move the most stuff back into the (future) utility room area. (This is in addition to the already planned (and mostly funded) storage wall of crafty goodness. An assortment of GORM pieces were decided on and purchased, to tuck into the area of the former pantry, but still be easily moved once the possibility of actually removing the concrete to replace the screwey pipe damage is an option. Since said pipe isn't currently leaking, I have the time to figure out how best to deal with the wierdness. Now all I need is a 11mm socket and rachet, since I seem to have selected the only Ikea product that doesn't assemble with an allen wrench! The GORM shelving will be useful even after the pantry area is eventually actually reconstructed with real sheetrock, and real shelving, as it can be useful in the garden shed, or under the carport, but since my estimated timeline for reconstruction is in the area of several years at least, I decided that temporary pantry shelves would really make my life better, since that was one of my favorite little things about Acorn Cottage... so shelf assembly over the next few days....
Posted by Alison at 3:07 PM No comments: