in which our plucky heroine tries to keep warm...

It's mighty cold here, and multiple layers, even indoors, are needed. Mostly because of wind and a lack of cloud cover. It was beautifully sunny, so I decided to put the laundry out on the line, and almost froze my fingers off. Had to run them under warm water when I got back in the house. Riding my bike to the store didn't happen, it was just too bitter cold from the wind chill. Instead, have been doing indoor tasks and work.

Scribal - I finished up the small Leo Minor charter started last week, adding detailing to the flat simple base painting. I was trying for a sort of playful yet still medieval effect, as the Leo Minor is an award given to children 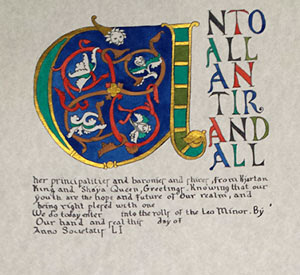 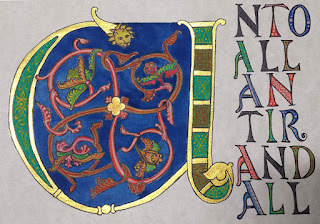 also started painting Charter #2 for this year, an AoA... I've never chosen this design before, as I have little confidence in my ability to paint faces, but it was the only other Kingdom charter blank on hand, so I decided to go for it anyway... Still have a lot of painting yet to do, all the clothing, and the dogs, and possibly some background as well. The very first charter I ever painted, my scribal mentor Marya pointed out to me that "not everyone in the past was white", and I have done my best to have charters I painted ever since reflect that. 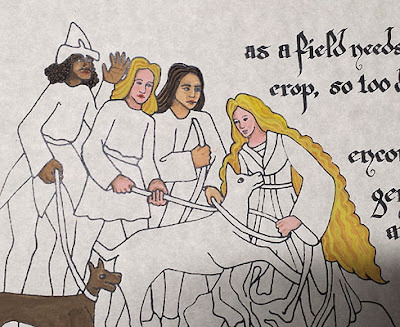 SWAP - I have been knitting away on my Sólbein cardigan for weeks now, since the beginning of January, and it occurred to me that it could become part of my SWAP, if I substitute it for one of the planned print blouses. The colorwork is too noticeable for me to call it a solid color, but in the three shades of denim/indigo blue, it will coordinate well with my Earth and Sky SWAP. (I still plan on sewing up all the print blouses, since they are already becoming a wardrobe staple)

Preserving -  the last several days included making up some candied peel. This year I went with pink grapefruit (since I eat them as a breakfast treat when they are in season) and pomelo. I make candied peel every few years, particularly since it is a favorite confection of my dear father; sometimes I add to the delight by dipping it in dark chocolate, though not if I am going to send it by post... 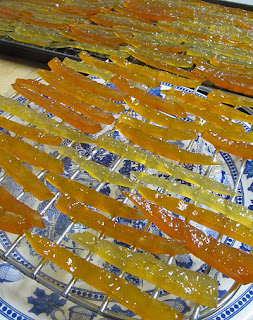 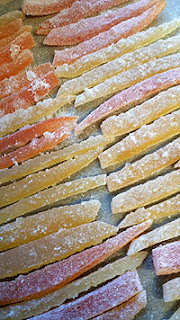 Once it cools and the syrup it has been boiled in has dried out somewhat overnight, it will be rolled in granulated sugar and dried further. One thing I did differently this year was to first peel the skins off in quarters, then did several initial blanchings, which made removing some of the extreme extra thickness of the pomelo much easier, as I was able to simply scrape it away with a spoon.

The lighter colored candied peel is pomelo, the darker is pink grapefruit. I was also surprised at how much milder in flavor the pomelo skin is than the grapefruit skin, considering that pomelo is closer to the "ancestral citrus"


today's gratitude - warm wooly bits made for me by my friends... today I am wearing a recombinant chopshop cardigan my pal Elanor made for me, and my beloved Totoro hat knit by dear Ariadne.
Posted by Alison at 5:30 PM