in which our plucky heroine...

Found my knife!! stuck inside a fold in the clothing hamper. So very glad it isn't lost! It'd been missing for about two weeks, and as it is my Favorite Pocketknife, and was a gift, and would be difficult to replace, I am quite relieved.

such a very odd dream... I was out and about at an airport!, like in the Way Before Times... only I forgot my phone charger, and then I somehow ran into C, M's brother, who I only know from online chat, and we were talking and I realised I had also left all my luggage and supplies at home, which would make my post-travel existence rather fraught, and I was trying to figure out how to deal with that after arriving at my destination. Then I woke up. Usually I can suss out what my brain is working on in the dreamlands, but this one was rather baffling... 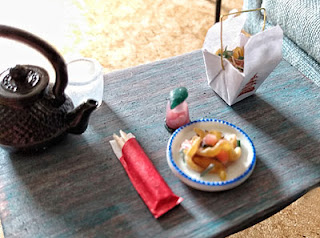 nom nom nom - take-out Chinese food... my attempt for the Tiny Rag Doll Nation June challenge (food). I was really struggling with the concept, when suddenly remembered that there was an assortment of jewelers wax in various colors on one of the workshop shelves...

The noodles with pork and green beans is made from colored wax and snippets of thread, the chopsticks from cut down toothpicks and origami paper. I folded up a paper take-out container and drew pagodas on the sides (freehand), with a bit of beading wire for the handle. The soy sauce dispenser is part of an empty eye drops bottle with wax for the top and base, and the tumbler is from the lid of the same. The small iron teapot was a holiday gift.

I think that Nandina needs some trivets, and maybe a place mat. The coffee table is from the Dollar Store, in the Before Times, I reshaped and cut it down, then did some fun layered paint/marker/chalk, and wax to finish it off. 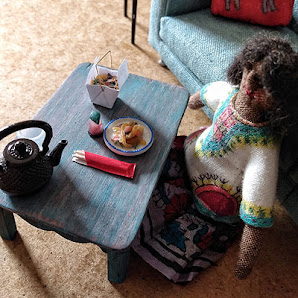 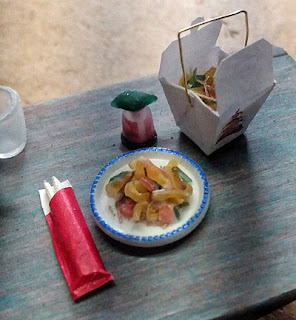 today's gratitude -  Yesterday I actually had tears of gratitude in my eyes... Angelique sent me a set of frozen popsicle molds, for when I am recovering from the surgery, and for the summertime. They make big frozen gemstones with the ring being the part you hold onto. So appropriate as we are both makers of jewelry, and so unexpected and thoughtful. 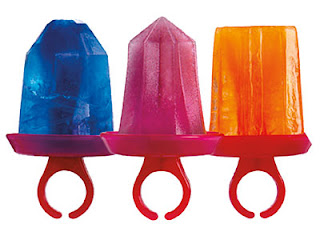