in which our plucky heroine does an assortment of small tasks...

so, yesterday I pulled out all the rogue mystery garlic, all single bulbs as far as I could tell. Black aphids gone, and I can prep the SWP* for transplanting. That also left me with a number of small garlics, which I then used needle and thread to string so that they could dry down enough for me to remove their dirty outer husks. 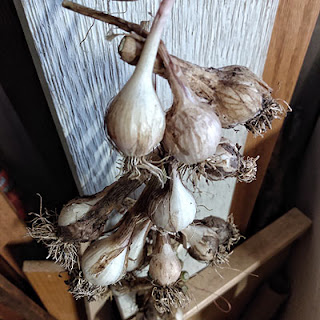 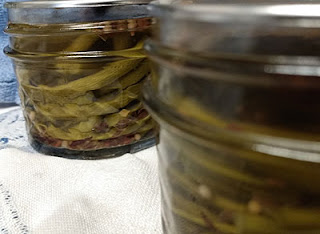 there weren't very many of them, but what garlic scapes the backyard yielded, I made two Very Small jars of pickle. Not much of a pickle eater, but these I like, and so do various friends of mine. Must remember to plant garlic for next year, and early in the autumn, not in the teeth of winter

※※※
on my morning sanity stroll, I saw a Northern flicker. It was on the ground, less than ten feet away from me and obviously eating something. It was too absorbed with its meal to pay attention to me, and I hoped to get a good photo, but a zooming truck put paid to that idea when it roared past. Afterwards, I took a look at what it found so very delicious, and in the dry dusty dirt was a large ants nest. Formic acid isn't my favorite breakfast seasoning, but apparently is delightful for flickers... 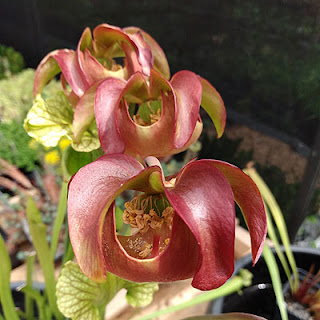 Sarracenia
Large pitcher plant flowers. Never seen the like before, as the plants aren't common

Began the process of gluing the trim pieces into the bathroom. I'm always just a bit hesitant to dive into housey projects, always conscious that I really don't know what I am doing...  Used the sample of the Gorilla Glue Construction adhesive and boy howdy is that stuff hard to get out of the tube. It was a good thing that I had the heavy duty tube wringer on hand. The adhesive will be much more cooperative with the large tube and the caulking gun, but I don't want to start on that until I have ALL the other pieces ready to go. Using the assorted shower curtain expansion rods to hold the long piece of molding in place while the glue set worked really well.
※※※

today's gratitude -  I love having everyday ceramics made by friends, it adds a layer of story to my daily life. I was so sad when I dropped the bowl I was washing and a big chunk of the edge broke off. Hopefully epoxy will allow it to have a continued life... I remember well the SCA event where Acantha had brought a bundle of her pottery and folks in our encampment were happily buying pieces to take home. The curve of the bowl edges is Just Right, and for several years the bowls not only had incised decorations, but also little loops just under the outside rim, like hanging bowls