in which our plucky heroine bites off more than she can chew... 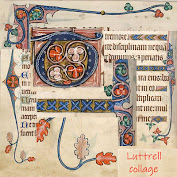 So, my friend Hlutwige, StormMaker of Stromgard, has been setting monthly challenges, and the one for April was Scribal Arts. Initally, my thought was to complete at least two original scrolls for the week-long challenge. Didn't realise that getting jab #2 would rather put paid to that idea, as it was half the week gone with feeling under the weather, and painting and calligraphy need rather intense focus.
Normally, original scrolls in An Tir are made specifically for a particular recipient, and part of the fun is finding ways to customise the design and motifs to the person. This was a different sort of challenge, making scrolls but leaving blank spaces for the person's name and date of the honor being awarded . I chose two different psalters as my examples, but did not have time to complete the scroll for Stromgard. The completed Three Mountains scroll, for the Order of the Mountain Sun, is inspired by the motifs and palette of the Lutrell Psalter. 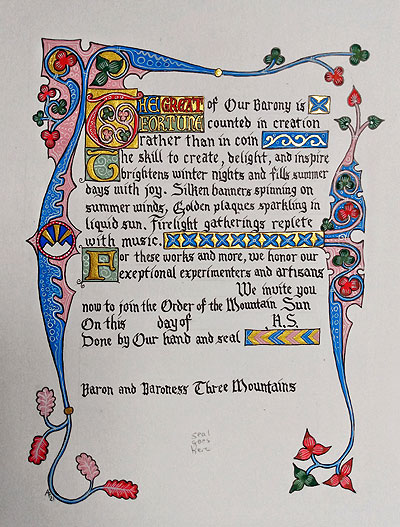 After about the equivalent of three full days of work this is the completed scroll blank.The empty gaps for the name and date are clearly visible, as is the space for the Baron and Baroness to sign and the seal to be located.

What I learned (aside from don't try and do too much at one time): There are many things I'd wish to have improved... calligraphic hand, spacing (both horizontal and vertical), more accurate paint matching, density of ornament, etc. The original manuscript is half again as large, which both allows for more detailing, and makes the fineness of the white line work more to scale. While I have an adequate Gothic style calligraphy, the particular and distinctive Luttrell Psalter hand is one I have not yet mastered, a task for the future. Given that the whole scroll is on an 8"x10" sheet of bristol board, and the text block is 3¾" x 4½", it will take time for my writing to become as evenly spaced as the examples I see in period manuscripts. All in all, my hope is that the various aspects will all improve with more time spent with pen and brush

So, how this all began was with my looking through the digitised manuscript, and creating a sketch combining various appealing border elements that seemed to work together, a no less useful challenge than direct copying of a single page. I chose the upper border from f.20v, the foliated intial from f.300r, the lefthand border from f.92v (which allowed a neat little roundel for the badge of the Order of the Mountain Sun), and the elaborate combined line filler and righthand border from f.14v: 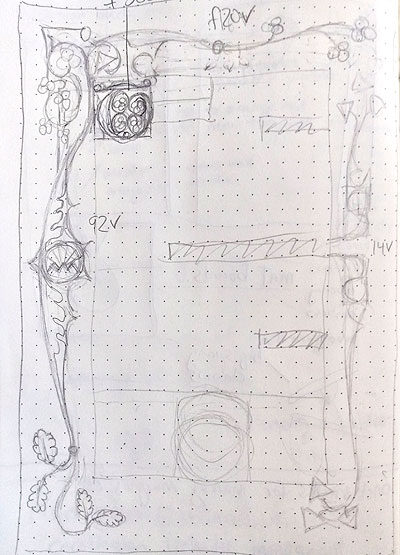 Next step, prior to any drawing on the scroll, is to lay out and calligraph the text. Learning how to use an Ames Guide for guidelines has saved me much preparation time, but it still takes several hours of steady writing with ink and dip pen. I used a ¾ mm Brause nib, and Calli Jet Black India ink, on 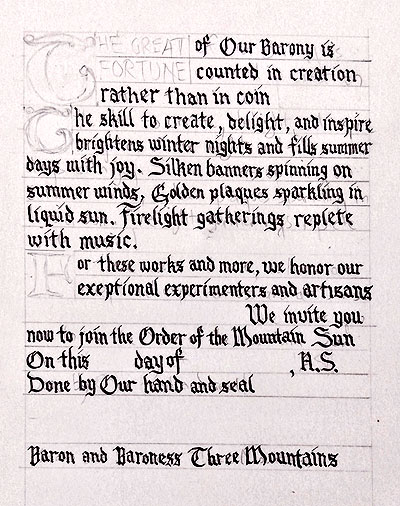 Next, the decorative borders are sketched in place around the text, and the various basic colors are painted in. This step is where it is really important to try and have the colors look balanced around the page, and looking at the medieval originals is very helpful as a guide. I had some difficulty with this in the first three words, and ended up needing to mix a third color in order to have it all work out neatly. If I only remembered to do some color sketches ahead of time, much difficulty would be avoided... remember that for future scribal efforts. 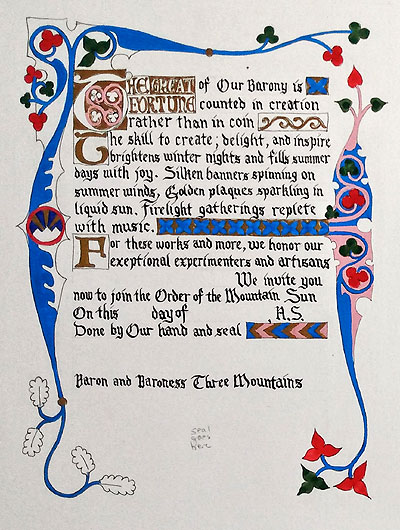 Once the base layers of paint are in place, the outlines are reinforced. I tend to use  01 and 005 black Sakura Pigma Micron pens. All the white line decoration is also added, using permanent white gouache, and my best sable brush. It isn't a small brush, but it holds a very fine point. 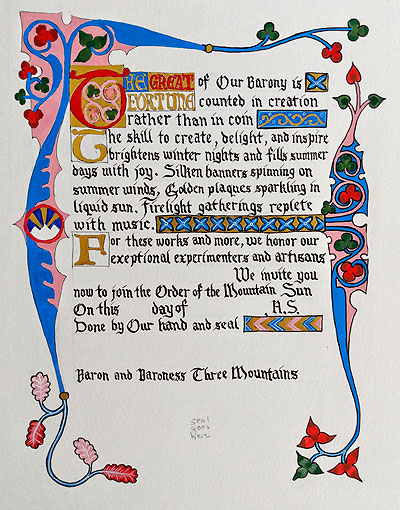 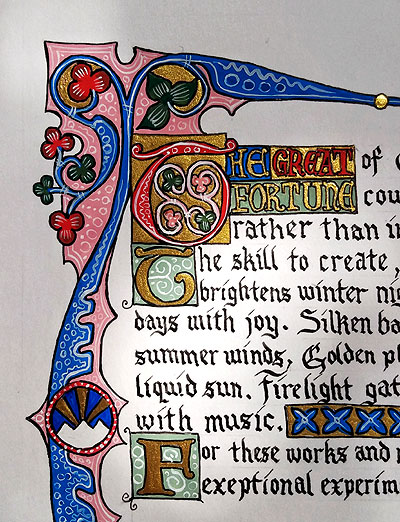 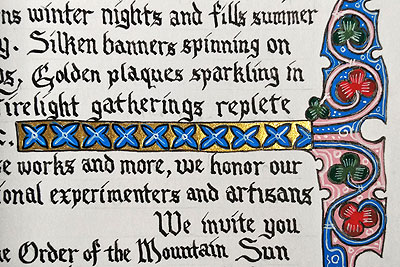 All in all, exploring the Luttrell Psalter is an activity that never becomes stale, there is always more to see and learn. I am particularly wanting to dive into examining the tiny line fillers, and also add the various ways of representing foliage to my scribal pattern model book. I need to do more calligraphy practice, in the hope that more frequent writing will help my letters become more consistent. I'd really like to figure out what color, or combination of colors, will give me that pinkish color that isn't bright warm red... That said, this scroll does meet my personal test, of "would I like it if it were hanging on my wall" and I can only hope that whoever does receive it feels the same way

a different view of the Luttrell Psalter
※※※

today's gratitude - I have good paints, and a few good brushes, and access to the British Library, as well as other international libraries, all without leaving my living room. Twenty years ago none of that would be true!

*assorted clips from the Luttrell Psaltervarious pages I looked at: 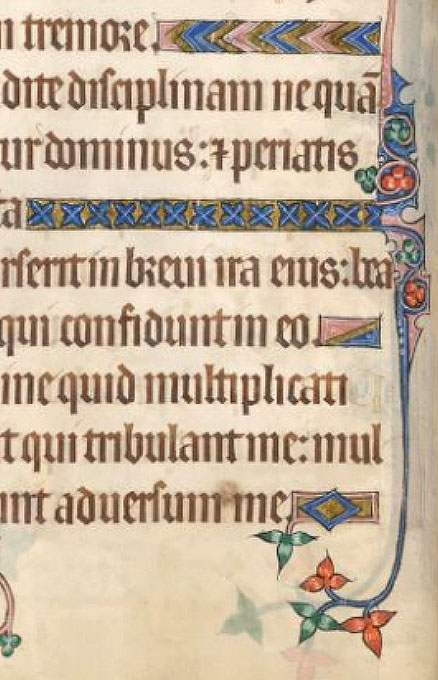 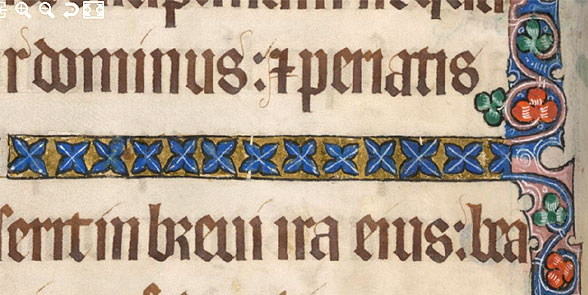 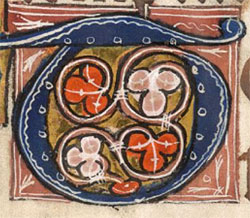 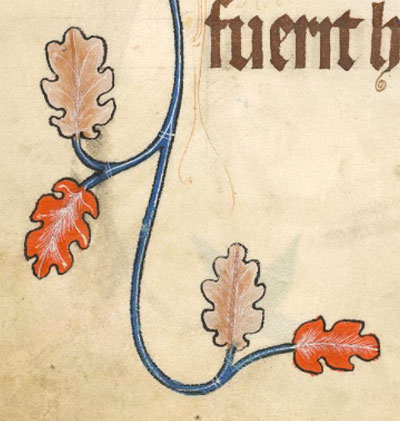