in which our plucky heroine still tries to reset the sleep wake cycle, unsuccessfully...

Things have not been going with with my mom, lately, which has necessitated much time on the phone, and worries play hob with my nighttime sleeping. I tried twice today to take a nap, being much exhausted in body and spirit, but each time I dozed off, there was another phone call, so finally threw in the towel and got back up, when in the middle of phone call number two, the doorbell rang!

Unexpectedly, it was the neighbor Young Alan, a high school student from a few houses over, who I'd spoken to about doing spot of digging in the back yard for me. He has started a yard and garden help business, and I figured that hiring him to dig out around the alley gate would be of mutual benefit... a bit of dosh in his direction, and less chance of an unhappy back or knees in mine. I'm going to have him pile up the layer he removes into two piles to become raised beds in the backyard near the alley gate. A trip out to the compost bins this evening showed his beginning efforts, which will continue later this week when he has another day off from school.

※※※
Finished up the padding and covers for the large/small sleeve board, so now it can be a useful part of my sewing gear, rather than just hinged wooden shapes. Should be very handy for future garment sewing... someday... 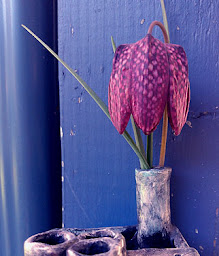 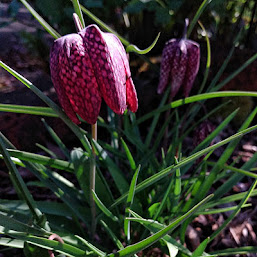 I found this delightful...

today's gratitude - several years ago I planted various small flowering bulbs, which are gradually returning and spreading. I am particularly fond of the grape hyacinths, and the very small clump of fritillaria. In addition, there are the violets, the few white violets in the lawn, and the masses of pinkish ones, all of which I didn't plant, but which simply showed up here