the smallest Jambe so far...

Friday our plucky heroine began another tiny regalia brooch for Tullia... 1/2" diameter. This one will become a Jambe*, and I lightly marked the base to guide where I will be wet-packing the white and yellow enamel to create the checky background... This should be fun! (will be the smallest Jambe ever so far from my workshop)

In 2015 I made a whole series of regalia brooches for her, for all the different awards and honors she had accrued so far. I then created two more earlier this year, when she was awarded two more Baronial honors. Our Tullia is an incredible dynamo, and is well deserving of all the recognition she receives. 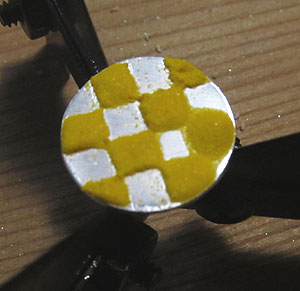 The first layer of enamel is first dotted into the places it will occupy in the finished background, to create the An Tir checky... then each square is shaped by pushing the enamel grains into a more precise arrangement, using a tiny 10/0 brush. This image shows the process about half complete 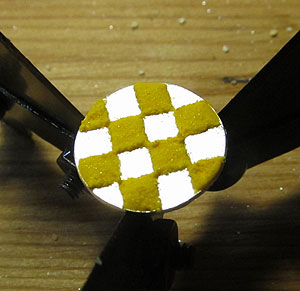 When all the enamel in the first layer is arranged in a check formation, it is ready for the first firing... By scribing the checky divisions in the fine silver base disc, it made it a lot easier for me to get the background design fairly even 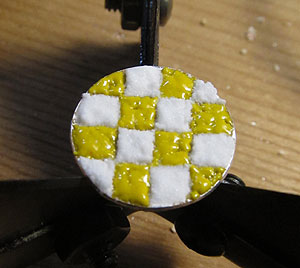 Once the first layer of golden yellow is fused in place, then the first layer of opaque white enamel is added... and so forth... repeatedly. It takes at least four to six firings before the background is relatively even and smooth. 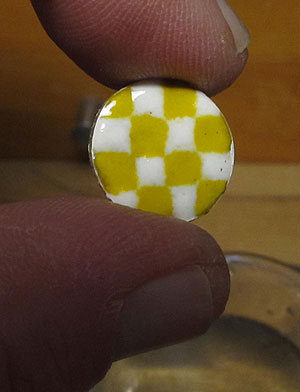 Just an idea of how small this enamel actually is... after six trips into the kiln, finally the checky background is level enough to allow for painting the final layers of enamel, that will define the Lion's leg and paw, but that is a task for tomorrow... 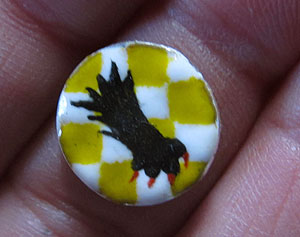 Sometimes the fire gods smile... got the wee Jambe painted and fired in only one go-round this morning! The bottle of lavender oil I opened was thicker than usual, which may be why the mixture of oil and painting enamel behaved so nicely?  I am quite chuffed; all that remains is to make a brooch setting for it

*the Order of Jambe de Lion is an award given in the SCA Kingdom of An Tir for excellence in the arts and sciences, and the badge is the "arm of the lion" on a background of An Tir checky (alternating gold and silver squares)
Posted by Alison at 12:24 PM