恭禧发财 Year of the Metal Rat

in which our plucky heroine thinks long thoughts and eats pot stickers and wonton...

It is Lunar New Year, the year of the Rat, and I cooked up a panful of gyoza for Saturday dinner, as I had planned... going to make up cooked some five flavor eggplant with the ones I picked up on Friday, and put another tray full of gyoza in the freezer, this time shrimp instead of pork. 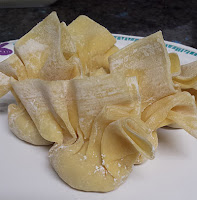 Sunday afternoon there was a temporary break in the rain, which made riding over to the local branch library fairly pleasant. Two of my books on hold were waiting for me, but the real reason I was there was the wonton workshop I had signed up for a while back.

The library workshop on Crispy Vegan Wontons sent us home with as many as we each were able to form in the class (14 in my case)... I hadn't been expecting to make things to take home, so wasn't really prepared (I'd have brought a container) - we were sent off with the wontons on a double paper plate, one beneath and one on top to protect them, which would work just fine in a car, but I was on my bike! I carefully wrapped the bundle in my scarf, and wedged it into my bike basket... it was a chilly and somewhat damp ride home as the rains were rolling back in, but the wontons and I both survived without mishap...

It turns out that cooking wonton is a snap! An inch of grapeseed oil in a small frying pan, a pair of chopsticks to turn them, and they cook in a few minutes per batch... I almost never fry things at home, because Acorn Cottage lacks a stove hood and vent, but wanted to try this. These are dry enough on the outside that there is not much in the way of splattering. I think that they would be a fun party treat... 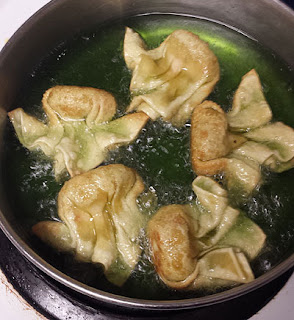 ※※※
I am really struggling with isolation... some folks were going to come over on Saturday afternoon to do block carving with me. Even though no one else showed up, I spent the afternoon stamp carving anyway... I wanted to try a new soft cut material, and figured that making a valentine stamp was a good plan. I sponsored a valentine sekrit swap this year, and want to make postcards to send to all the participants. 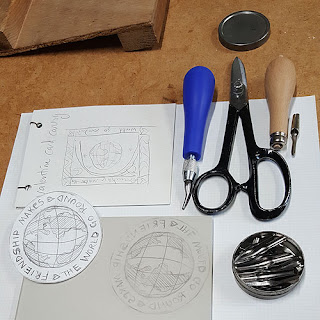 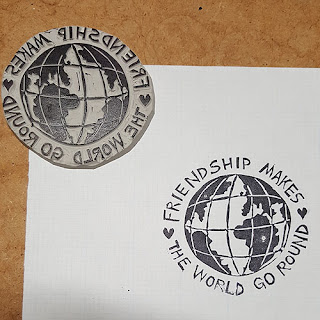 The stamp needs some additional work, as is normal for the first pass. The new material carves very easily, is a bit too soft for really fine details, and will definitely need a wooden backing. (It may be a good option for teaching block carving, particularly for people with less hand strength)

Anni pointed me to the Cascade Print Exchange, which sounds like fun; to get prints from other people, like back in the golden days of blogging, when there were some amazing swaps!

※※※
Saturday was alarmingly warm for mid-January (as in people were sitting outside without coats, and I didn't need gloves) which made for pleasant bike riding. There were more citrus tasting demo things happening at the grocery, but I am still waiting on organic blood oranges and maybe seville oranges as well. Am tempted to try tangerine for marmalade. There was another shipment in of organic pommelo, so there will be another small batch of candied peel, all to be put aside for next years fruitcake. It was interesting to sniff the specialty citrus, like bergamot, and makrut lime, but since they weren't organic, there won't be any really odd marmalade this year. They did have organic "finger limes", which I have never seen before, but they are more for use as a garnish than an ingredient, and at almost 20$/lb, I left them there

※※※
have almost finished cutting out the pieces for the flannel shirt... there was not really quite enough fabic, but I am going to try to eke out as much as I can manage, and then do things like the inner cuffs, the undercollar, and the inside yoke panel in a different but hopefully coordinating fabric. The shirt fabric is a lovely soft grey and black tiny "rectangular gingham" flannel, and I found enough scraps of some black with grey polkadots quilt cotton to use as accents.

If I only had another quarter yard of flannel all would have been enough, or if I had not decided to give it a hint of "shirt" detailing. But one of the things about having only a few basic TNT patterns is that it becomes irresistible to add small changes for variety sake, and also to learn new skills. While I am not going full on with a collar and stand, simply an open camp shirt type collar, I do want to try making a tower placket. (I have never made one in all my years of sewing).

※※※
January SMART goals (x=extra)
today's gratitude - I am grateful to live in a place that has an assortment of specialty markets including asian markets both large and small, that allows me to indulge myself in the small luxury of cooking various kinds of foods that would otherwise be rare treats indeed