in which our plucky heroine remains under the weather...

Yesterday I must have overdone it a bit because today was mostly sleeping, getting up enough to make some sustaining food bits (broth, a scrambled egg, some kasha), and do a tiny bit of chores... I brought in the wheelie bins during a break in the weather, the rain and wind have been quite howling today.  Stitched the top button back on my everyday chopshop cardigan that Karen made for me which for some reason unknown to me has buttons that keep falling off... (since the buttons themselves are smooth wood, and the button loops are wool, and they are stitched on with Extra Sturdy carpet and button thread one would think the buttons would be fixed for the ages) 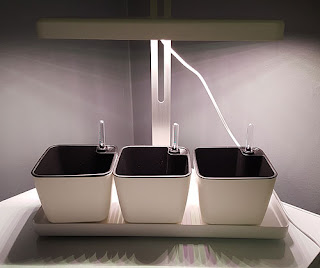 Part of my overdoing yesterday was a bus trip over to Trader Joes, where I picked up a wee little basil plant for the new indoor tabletop planter...  this afternoon I rummaged through my bag of seed packets, hopeful for cilantro and arugula seeds for the other two pots. There were actually a number of cilantro packets, but zip on the arugula. Am considering putting corn salad in the third pot instead for now, until a trip to the garden center can be arranged...

※※※
Radio City Music Hall, 1980, Halloween night...
I was there... we danced in the aisles...
※※※
Now that I'm done with various holiday sewing projects, and I've finished my Athena blouse, I'm turning my sewing focus to the canvas chore coat, which is intended to be part of both SWAP and 6PAC. My first two steps will be: scouring the resource shelves for something that is suitable for a muslin, and taking some relevant measurements from my current rain jacket. I'm certain that this pattern will need some fitting modification.