in which our plucky heroine continues efforts to be of good cheer, and focus on what has been going well ... 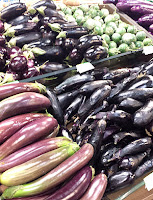 There was a small break in the cold rain and wind, so I headed over to H-Mart to try and get some more gyoza wrappers. While there, I couldn't resist the eggplant display; they had seven different varieties, and while it was no match for the Berkeley Bowl that shines in my memory, it was pretty excellent, and I brought home some small Japanese eggplant to make "5 flavor eggplant" this weekend. 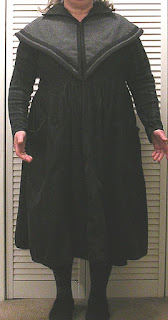 the wool/cashmere capelet is finished, I stitched trim around the lower edge to echo that in historical images; alternating hooks and eyes down the center front opening hold it closed... It is just as cozy for wearing around the house as I had envisioned.

※※※
in the "you don't ask you don't get" mode, while at the pharmacy (where I also made the sad discovery that now that I am old, my formerly totally covered prescriptions all have co-pays) it occurred to me to ask about one of my meds, which I need to break in half since they don't make a low enough single dosage... they recently changed the generic they carry to a different manufacturer, and the "new" pills shatter instead of splitting, even with a "pill splitter"... so I asked if there was some way that they could get me the former generic instead of the new one. Turns out that is probably possible, and hopefully tomorrow I can pick up that prescription. Fingers crossed!

※※※
... and in additional tiny good news, there is finally a sprout in the cilantro pot, almost three weeks after the seeds were planted! 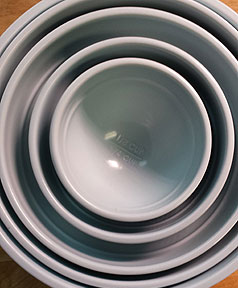 ← a surprise gift from Rafny - measuring bowls! each one has an inner line, for an amount of half the capacity of the total bowl, which seems dang useful, particularly for times when making a "half recipe"... Plus they are even the sort of subtle blue that fits seamlessly into my kitchen aesthetic here at Acorn Cottage

※※※
finished the handknit wool mitts for Barbara. I forgot that the wool was also superwash as well as merino, both aspects of yarn that are not my usual. Cannot do a felted splice, but the mitts are so very soft, which is what she asked for, and New England wintertime is not yet over... 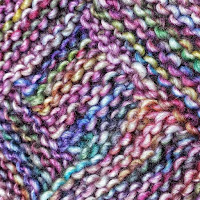 ※※※
January SMART goals (x=extra)
today's gratitude - I know how to cook, I have food to cook and a kitchen to cook in, and decades of experience have taught me how to cook things I like to eat. In addition, this month I have been doing better at eating up the leftovers.

Indeed I have been feeling very much like a kind of metaphorical eating up the leftovers in relation to my sewing - using the fabrics I collected over the years and turning them into a wardrobe I like to wear!
Posted by Alison at 7:20 PM