flattening the band - for Mim who asked...

in which our plucky heroine makes one tiny improvement...

One of the minor challenges in sewing a knit top is getting the edges, particularly the neckline edge, to be cooperative with whatever appearance is desired. Some just leave the raw edges to roll as they will, some use a specialty sewing machine to "coverstitch" the edges in the same way that RTW knit garments are finished, and there are a whole variety of edge finishes that can be used. Most often I apply a narrow edge binding stitched down by hand, similar to the most simple Alabama Chanin style of binding.

The more common look in RTW, of a band finish around the neckline, is tricky to get right. There is no always correct rule of thumb as to how much shorter to cut the band than the neckline edge, in order to have it stretch just enough to lie flat. (not to mention that it can make a difference where along the neckline one stretches the band a bit more or a bit less...) Cut the band too short, and it will pull in so much as to gather the body of the garment; cut it too long, and the band itself will not lie flat, but instead flap loosely in an amateurish fashion.

Despite my years of sewing experience, I am as subject to this difficulty as anyone. For my most recent knit top, I decided on a band neckline, garnished with some hand stitching to hold the seam allowances in place. Much to my dismay, after the first washing, when the fabric and stitching relaxed into their final configuration, the band was a bit flappy, just at the center front where the folded band edge curved in a "U". Obviously, I had not stretched the neckband strongly enough. Since redoing the entire neckband wasn't an option, I decided instead to modify the band while it was still in place... 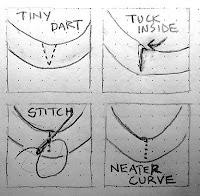 Sometimes, when binding an edge with a "V" neckline, it helps to fold in a tiny dart just at the point of the vee, to help the binding turn the corner. It occurred to me that I could carefully fold in several tiny 1/8" darts in the binding, spaced far enough apart to take up the excess at the very edge, and allow the binding to curve more smoothly along the neckline. It was a bit of a faff to use the needle to tuck the knit binding into the configuration needed, and then take tiny fell stitches to hold it in place, but in the end the results were exactly as desired: