media Monday + "hey Coach, what next?"


in which our plucky heroine ramps up... 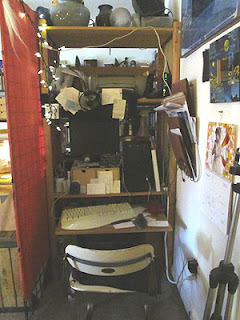 The computer zone here is has been sort of a hot mess, for a long time. There is really only one place in the house where it can be located, at the confluence of the phone line and a power outlet, and since Acorn Cottage was built long before multiple outlets all over the house were considered standard, much less multiple phone jacks.

My declutter coach came up with a strategy, that I would first remove ALL the paper clutter, as well as the vast numbers of random bits that seem to have found their final resting spots scattered around the desk space. Dealing with the paper* is a separate project, as is dealing with whatever was cluttering up all the flat surfaces. There isn't much I can do about the drifts of power cords that garland the right side of the shelving and desktops, but I can keep the surfaces from becoming buried in moop-y detritus. 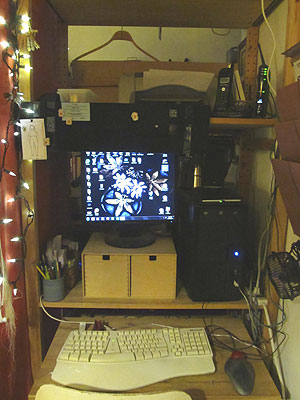 Now that the bundles and bits and what feel like reams of old notes and printouts have been corralled and removed, the bones of my desk space have surfaced. Like most of the rooms, the living room is dark, so I draped a strand of fairy lights up to help make this spot a little less troglodyte. I cleared out one of the two little drawers under the monitor, will think about what may be useful to keep there - the other drawer has an assortment of CD's that are used on the computer (program backups, music, and information) so they rather belong there for now...

This just showed up on my FB feed and was rather charmingly unexpected; I remember watching The Monkees on television back when I was young, but I don't remember this...