in which our plucky heroine leaves the pomodoro timer on for most of the weekend...

:::
Just accidentally read this on Terri Windling's blog and it hit me hard:
"It is impossible to live without failing at something, unless you live so cautiously that you might has well not have lived at all, in which case you have failed by default."

- J. K. Rowling (from her TED talk on failure)
So much of the time, I feel like my life is defined by my myriad fears, and I can no longer ignore how much fear has limited the tale of my life. I have struggled and struggled, on my own and with help. Our plucky heroine is exhausted, and reaching for some feeling of hope. 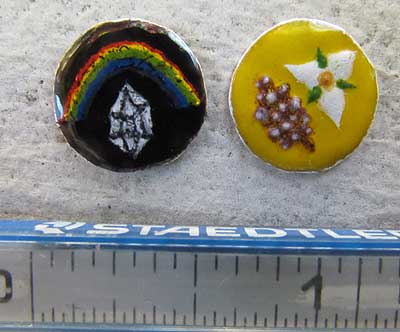 These are what I was working on yesterday. I rather got stuck in the "no enamel will be the boss of me" mode last night. Micro-regalia; a Crystal Rainbow, and Baron and Baroness favors. The enamels are only 1/2" diameter. Once they have been set as brooches, these will join the set of micro-regalia Roman style brooches I made for Tullia...

:::
One good thing about Sunday Parkways is that one of the many cross streets full of chuckholes in the neighborhood now has had a layer of pebble/asphalt filling the worst of them, so that street at least (which is part of the route), is now a lot safer for bicycle riding. Sad though, that the Portland Police "exchange your cable lock for a U lock" booth ran out of locks within the first hour of the event. Mr Policeman was very apologetic, said that they really underestimated the demand...

:::
Kiln is turned off for the night and am winding down with audiobook of Gentleman Jole and the Red Queen, and some handstitching on my new sleeping hood. Somehow, trying out new things in stitchery is restful, in a way that studiowork never is... I am not only hand stitching this project, but am intending to attempt some of the finishing stitchery techniques used on the Herjolfsnes clothing... 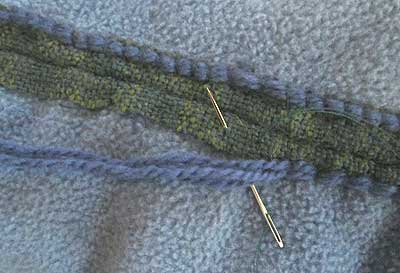 Seam finishing on the inside back seam of the sleeping hood... the overcasting/couching down along the raw edge of the seam (a historical technique) appears to be working well. The rest of the seams on the hood are done differently, seamed separately, with the outside layer having the raw edges of the seam allowance simply held down with a running stitch in wool, and the inside Polartec layer done with a lapped overcast seam, for maximum smoothness and less bulk.

Back seam allowance width has been cut down to about 3/8". I figure if the narrow wool at the center back of the hood ends up being annoyingly itchy while in use as a sleeping hood, I can always go back and stitch a thin strip of silk or linen over it.