hot but not fun


in which our plucky heroine tries not to be grouchy...

...because in my fantasy, my house is insulated. and there is external shade on the east and west sides. Deciduous shade. and a whole house fan in the attic, to draw in cool air at night, in the summertime. 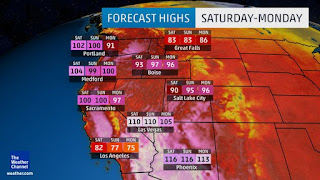 NOAA says that we are in for a hotter and drier summer than usual, and this weekend is ramping up to be the first really intense example. Forecast is for highs between 100 to 102F. Fortunately it is still early summer, and hence even with the temperature in the triple digits, it is cooling down at night, which means that fans can be run in the early morning to help keep Acorn Cottage from becoming Acorn Oven. Later in the summer it will be harder.

I was worried because I've been hiding in the house, and couldn't hear the chickens... went and checked and they have dug holes in the nice cool dirt, under the shady trees, resting and taking chicken dirt baths 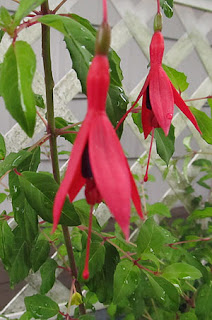 Hardy fuschia blossoms along the front walkway... I love this plant, it does well and springs back up every year with no real input from me other than cutting back the dead foliage once a year. And it has these vivid small flowers every summer!

I'm going to scavenge around the house to find water-holding containers for the few plants I am trying to baby through the summer. The persimmon tree is one that apparently likes summer water, and I just noticed that the grape I put in a few months ago is looking super stressed, so needs some help. A bucket with a small hole will gradually disperse water, and can be filled with gatherings from waiting for water to get hot for dishwashing or showering.
Posted by Alison at 8:02 PM