snippets and a subtlety...

in which our plucky heroine is delighted with yet more treats and tidbits...

Saturday here was the occasion of the Saturnalia Shindig, what is becoming an annual celebration here. My natal day often falls within the days of Saturnalia, a festive holiday we have begun to make our own. Dressing up in Ancient Roman, or similar clothing; possibly researching suitable edible tidbits, are always a fun option. This year, the theme inspired my pals Ursel, Marya, and Ariadne to even greater heights of creativity, and they surprised us all with an enormous replica of the Coliseum, built from graham crackers and fig newtons: 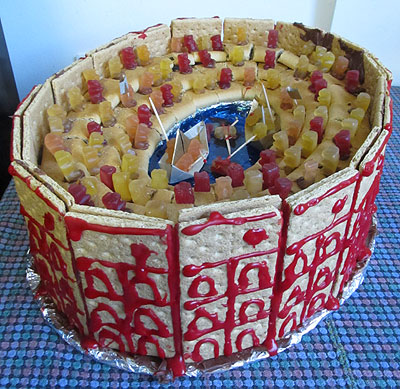 Ursel (an architect by vocation) designed the edifice, it was built by her and Marya, and the Naval Battle in the center of the arena, complete with blue gelatin water, gummi worm "sea monsters" and origami ships, was the work of Ariadne: 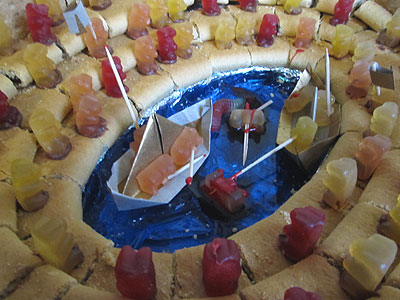 Truly I am blessed with delightfully creative and silly friends!! After much admiration, the Coliseum was sacked by the children at the party, who had no qualms about munching on architectural fragments, gummi bear Roman citizens, and blue Jello water... 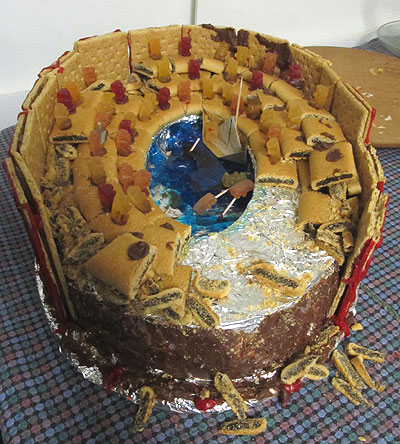 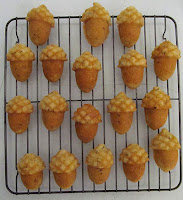 Prior to the party, much cookery happened here at Acorn Cottage. I tried for the first time a variant on my usual acorn cakelets, flavoring them with caraway (as is common in the British Isles) instead of the usual lemon/poppyseed. These were quite well received, and by the end of the evening they had completely disappeared. 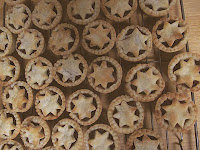 My quincemeat tartlets suffered a similar fate; while not at all anciently Roman, they, in my opinion, a required part of winter holiday party food, and I'd not dream of leaving them out. Every year I make up at least one batch of quincemeat preserves, and eventually intend to plant a quince tree, to ensure a good supply of that amazingly fragrant pome fruit. 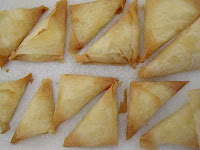 Tiropita, with a feta/herb filling were easier to make than I suspected, particularly since I indulged myself with a small kitchen upgrade, and got an OXO silicone pastry brush for the melted butter. This is a doddle to wash, and will surely not leave behind random brush hairs like my lovely if fragile natural bristle and wood one is wont to do. I was surprised and pleased at how nicely it handled the delicate fillo dough layers.

Lastly, but also not at all historical, I made a good sized batch of mocha balls, using the McMenamins coffee liqueur in place of our usual Meyers Dark Rum. This was rather a last minute substitution, made when I discovered that there was in fact no rum on the liquor shelf. There were, however, no complaints... 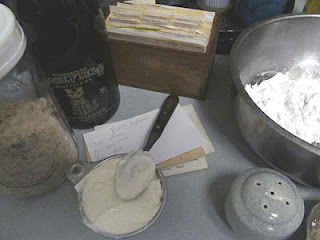 During a rare sunbreak today, it was possible to replace the failing shed door fastenings. New shed door fasteners, bolted through the door frames. The former owners had attached a hasp latch with wee 3/4" long screws, which eventually simply fell off. I might not be a carpenter, but even I can do better than that!

(rings to be secured by an outdoor padlock)
:::

In addition, M and I managed to get three grow boxes now planted with garlic, mulched with cocoa hulls, and covered with chicken wire to deter squirrels. I know it is a little bit late in the year to get the garlic planted, but the weather kindly continued to refrain from dumping gallons of water down our necks, which has not been the case ever since the mail order garlic showed up here. 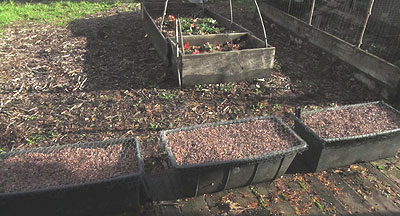 Also a bag full of flower bulbs of unknown type have been added to the front yard flower border. And some refurbishment of the salad table, in the hope of some tiny amounts of wintertime greens. Next year my intention is to do a much better job of preparing the salad table for winter. Preferably like in August... Half the salad table re-planted with some winter chickweed and mustard greens, temporarily covered with chicken wire to deter squirrels. I'll be building a better supported cover structure that can both cover the plants from frost and included mesh of some to keep the noxious tree rats away from the plants and the nice soft dirt: 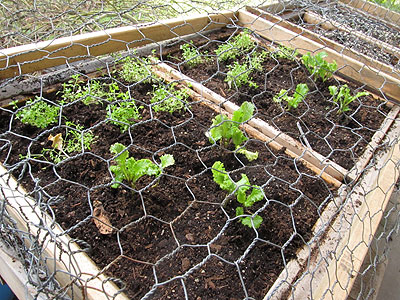