in which our plucky heroine shares some brightly colored things...

Did not get as much studio and house work done over the weekend as desired, as some 24hr bug took me out, and made attending my pal Emily's 50th birthday potluck picnic a definite no-go. Not my best weekend ever...

By midday Sunday was feeling rather less like a dogs breakfast, so headed out to the King Farmers Market(much smaller than the big downtown one, so I am less likely to be stepped on) Though the budget did not stretch to exotic mushrooms, or lamb bacon, I brought home some tasty berries, local new cucumbers named "Diva", and a green I'd never seen before called agretti, which is related to tumbleweed (tastes crunchy and green and slightly salty in a good way)

Monday's breakfast was rather self-indulgent: french toast made with some of the last of the homegrown eggs, and fresh berries. Did you know that if you cut strawberries vertically, they make a heart shape? 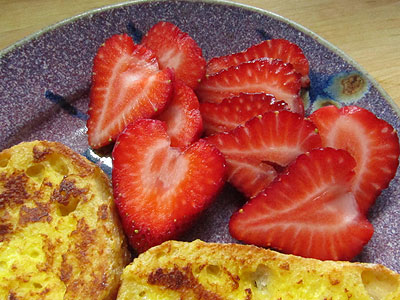 :::
Since not attending the shindig on Saturday, the ingredients for my potluck contribution were all still in the fridge, so there was nothing else to do but go ahead and make up a batch of Calico Confetti Coleslaw. Usually I only make fancy coleslaw for parties (my everyday recipe is just cabbage carrots oil and salt), so this is a real treat. 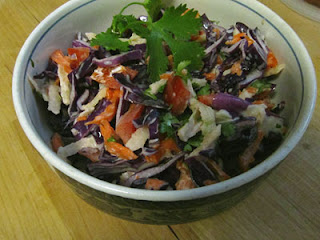 To make the slaw, chop or grate 1/4 head of cabbage, 1 red bell pepper, 1 to 2 carrots, 1/2 apple. The original recipe calls for jicama, but since that only shows up occasionally, and never organic, I substitute a crisp apple. The original recipe also calls for half a jalapeño, but since I am a capsicum weenie, I leave that out. For the dressing, mix 1/2c mayo (or olive oil), 2 tablesppons or more of chopped cilantro, 1/2 c fresh orange juice, then salt and pepper to taste. The original recipe calls for 1 tablespoon fresh lemon juice and 2 tablespoon sugar, which could certainly be added if you were making up a big batch, but I find it unnecessary.

:::
And for your crafting pleasure... another freezer paper stencil tip: to center a design on substrate, I mark the centers before cutting the stencil, then carefully cut suitable notches in the paper, to allow alignment before ironing into place without getting close enough to the stencil for the paint to go awry. Here, the important thing was to have the design centered on the fabric, so I ironed a crease in the center front, and then aligned the notches... 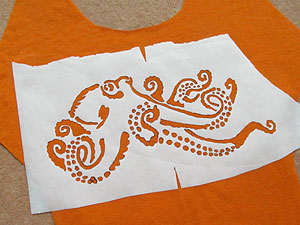 Applying the paint to the stencil ends up looking like this! I use a very finegrained sponge for small stencil projects, and apply several thin layers of paint. 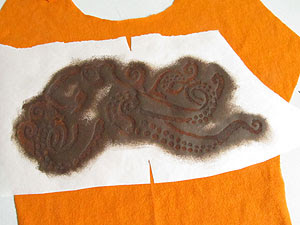 Voila! Not bad for almost a weeks-worth of small evening chunks of time, cutting all those tiny dots was really slow, but I am quite happy with the results... Now this this can go on to be my next carryaround handwork project. (The center front crease used to locate the design is still visible) 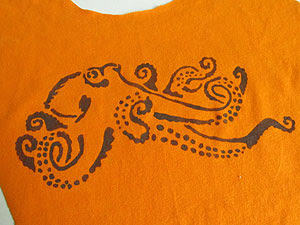