in which our plucky heroine thinks critically...

Put in a bit more time over the last few days on the horses blouse, which is almost done. The pattern draft comes together neatly, and the instructions are superb. (The untimely death ten years ago of Fred Bloebaum was a great loss to the sewing community. I particularly appreciate the inset notes in the instructions about various details and tips for construction or pressing or marking. The shawl collar construction worked very well, but I am not entirely happy with the shape of the finished collar (no fault of the pattern) but the wide spreading shape doesn't suit my face, and the grain of the collar means that the horses on the collar are once again tilted. 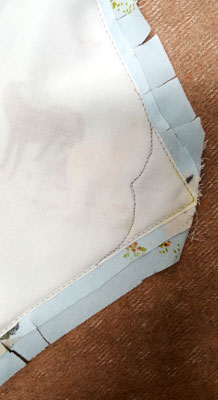 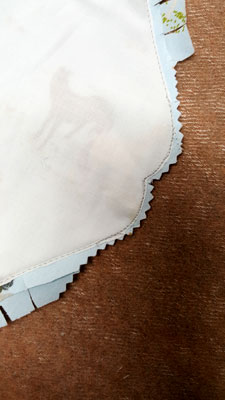 I reshaped that part of the collar to a scalloped and curved edge instead. Fortunately I had not yet stitched the collar facing down, so it only needed my making up a template, turning the facing/front inside out, and re-stitching and pressing. I am remembering now that way back when I made this pattern before, I made several variations on the collar shape. What is interesting to me is that I am becoming much clearer on what styles/colors/shapes appeal to me the most*, often before starting on a project, or in the middle when it is still possible to change, rather than sewing up something only for it to feel subtly wrong. Not to say that I am immune to wadders, but rather that they result from sewing or fitting fail, and not from poor design choices. 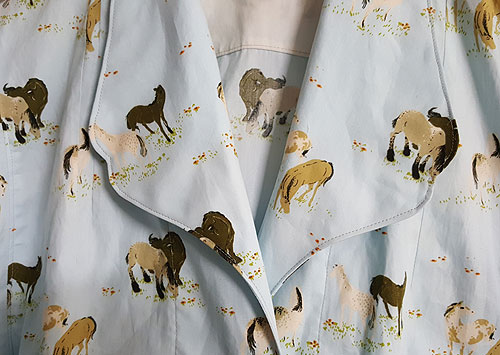 ...and, in the end, it is sort of a wearable muslin, in that (while it is quite wearable and will coordinate well with all my pinafores) some significant modification was needed, and would probably do a bit more before making it up again. First off, I cut the blouse fabric an inch and a half too long, despite shortening the pattern beforehand. I no longer do a turned hem on blouses that will only be worn underneath pinafores, as since the hemline always remains unseen, simply serging the hem edge gives a flatter and faster edge treatment that is just as durable.

Also, the mostly straight up and down bodice ended up needing some additional hip width, and rather than fit in some godets, which would be most annoying to finish the points and edges, I decided to whack out as long a rectangle from the remaining scraps as could be managed, sew repeating darts into the rectangle to curve it, and then cut a centered rectangle on the back of the already stitched blouse and inset the curved rectangle as a flared peplum. Definitely a non-standard alteration, but it echoes the square armscye and looks intentional. In the future I would also want to cut the sleeves at least an inch longer, which would have been possible had I not cut the front and back too long. Overall the pattern does give me a second option if a straight grain blouse front is needed, I love the square armsceye, and intend to do some more fine tuning the fit as well as experiment with collar shapes in the future.

※※※
January SMART goals (x=extra)
today's gratitude - wearing a self-made wardrobe leads to random unexpected compliments from (female) strangers. Yesterday while I was walking to the store a woman in a car stopped to compliment my Solbein lopi cardigan, and we had a little chat about knitting, before the light turned and she had to drive on. It is always women, and happens to me at least once or twice a month. I don't know whether that is because men don't notice clothing, or because they don't notice plump old women, or because of any of the other myriad complicated rules of gendered interaction. 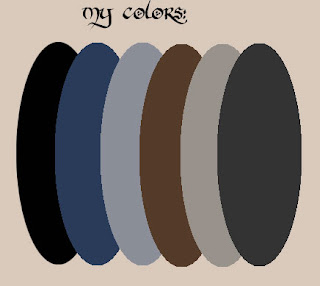 * medium to low contrast patterns, subtle darkish colors, curved edges rather than angular, stripes, botanical motifs, and of course using my chosen color palette and natural fibers. Whenever I push the edges of these guidelines it is chancy how well I will like the results. The horses blouse is, I realised, borderline in that the print is actually quite contrasty in value range. I was seduced by the incredible charm of the Heather Ross ponies.
Posted by Alison at 10:37 PM