in which our plucky heroine wakes up fast... 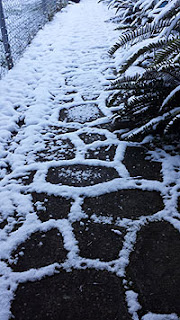 in the "well... that could be worse, but it also could be a lot better" ways to start the day: while in my only barely awake mode, walked into standing water in the bathroom, and the active sound of dripping. Woke me up right quick it did! My first thought, sans spectacles, was that the ceiling was somehow leaking, since there was also a puddle of water *atop* the closed toilet seat...

nope...instead, apparently one of the undersink (fortunately cold water, fortunately pinholes?!?) components failed sometime during the night after I went to bed, and was spraying tiny wee pinhole streams of water in several directions. Didn't fail at any of the actual plumbing joints. Very weird, very messy to cleanup but was just clean cold water, which is a blessing compared to the previous time something went sideways in there...

Also fortunate that I decided the last time the sink was fixed to not box in the underneath, but instead to leave all the undersink guts out in the open, which made it easy to simply turn off the shutoff valve to that half of the faucet. No using the sink until it gets fixed though. Now I will need to figure out just what is needed to replace that part of the water line, and Deal With It. Bah!... As I recall it was A Big Problem to get something that fit and bridged that gap... How I wish I had gone into the trades, instead of away to college!

If I was a young person now, instead of being old and broken, I would take that path. I have, fortunately, over the years, developed some minor ability at the kinds of home repair tasks that come up, enough to do simple things, but enough to know when to call for help... This should be a task that I can manage, IF I can find a Suitable Part... which was the problem in the first place as I recall...

Almost done with Finished the cream/brown mushroom print blouse. Preparing the "sewing kits" ahead of time is proving really helpful, as I can do the cutting out when I am feeling like tackling it, and do the sewing when I want some fairly immediate gratification. If all goes well, I have three more garments in "kit" form, and four more yet to cut out. I'm not sure if I want to make brown jersey leggings, or yet another knit top. Probably should go for another pair of leggings, since I have more than enough knit tops at this point.

MRI results - tendons are not torn, no odd tumors, there is inflammation and edema (and some degradation, but not to a worrisome amount, normal wear and tear of aging) PT says - keep doing exercises, water exercises, acupuncture, and other self care. A custom orthotic may be helpful... still waiting on referral to new podiatrist, but much relieved at the new data, evenn though frustrated at the continued pain. This gives me hope that in time I may eventually heal and be able to return to my everyday life, walking for pleasure, and maybe even easy rambles in nature... a girl can dream, right?


February SMART goals (x=extra)
Posted by Alison at 10:02 AM