in which our plucky heroine maintains forward momentum... 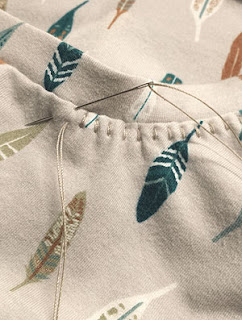 Almost done with SWAP garment #3, the long sleeve knit top. Rather than simply use a line of twin needle stitching to finish the sleeve hems and neckline, a line of hand stitching adds a bit of subtle texture... It doesn't really take that long to stitch, and makes it obvious that this is a custom garment rather than RTW. To me, these motifs look like feathers, and also like fallen leaves. The colors make a slightly bright accent to my usual wintertime dark indigos and browns, but will also work happily together with the turquoise/teal pinafore planned for a springtime (not SWAP) garment.

Probably the next bit of sewing will also be for me, since the "mushroom print" blouse has a light colored background... Changing the threads on the serger is annoying enough that working through all the similar colors at one time makes sense. After that it will be time to switch to dark blue threading, as I have two more knit tops for my Mom, and an indigo/black linen pinafore for me. Not quite certain yet which style I will make that one, though I am tempted to return to an old TNT style with an empire waist and spaghetti straps... havn't made one of those in long enough that there aren't any in the closet currently. The differences in pinafores are basically all in the bodice shapes, and in the various ornamentation or lack thereof... The waffle weave two color linen is decorative enough oll on its own.


today's gratitude - Thank you Mea for sharing this new-to-me cover version of an old favorite song... While I totally remember the very first time I heard Simon and Garfunkel's "Sounds of Silence" (in the living room of Vanessa's house back in the late 60's... her mother had recorded it on their reel-to-reel) I must say that this version takes it to another level entirely. What a voice!
Posted by Alison at 8:35 PM