Tigress Can Jam - the gang of 4

In which our plucky heroine spends hours in the kitchen...

first, a tune, to get in the mood for jammin'
Aside from the baggie of stalks from the rhubarb fairy, I had a nice 2¼ lb bag of lovely red stalks from N. to work with. There were at least three kinds of jam that appealed, a "basic" strawberry-rhubarb preserves, the oddly named "blubarb", and lastly a "jam of four reds": rhubarb, strawberry, blood orange, and redcurrant, which was an inspired fantasy one early morning...

Started the basic on Wednesday evening; I was initially inspired by the protocol set out here, to very gently stew the fruit, and separate out the sweetened juice to cook it down, then add back in the fruit towards the end, for a fresh flavor. Since I still had plenty of strawberries in the freezer (they'd been hidden under things, a chest freezer is most economical to run, but my inventory skills are rather lacking), I simply measured out four pints and set them in a large bowl of sugar overnight. The last two days I simply brought the mixture to a boil each morning and evening, then poured it back into a large bowl to cool. Somehow, this morning, I ended up adding in a pound of finely cubed rhubarb, the zest of one organic orange, and a quarter, and boiled the whole shebang until it reached a good thick consistency, (I totally forgot about straining out the strawberries) then jarred and water bath processed it for 15 minutes.

Bluebarb sounded interesting, not sure if it will be delicious, or detestable, so I will make a very small trial batch. The recipe calls for 3 cups of each fruit, 4 to 6 cups of sugar and a ¼c of lemon juice; I decided to try with 4 oz rhubarb, 4 oz blueberries, 8 oz of sugar, and add the 1 T of lemon juice per pint jar that is suggested for safe acidity. This amount made only two tiny 4 oz jars + about a tablespoonful, and I obviously did something wrong, since instead of jam, I ended up with something more like purple sticky fruit toffee. This was only apparent after I had processed the two little jars, when the tablespoonful became a solid mass. The flavor, before it solidified, was quite good though; the sweet spiciness of blueberries is a good friend with the rhubarb; the color is an amazing vivid royal purple. I might try this again if more gift rhubarb comes my way, or perhaps attempt a blueberry rhubarb jelly...

Saving the best for last: the jam of four Reds (which I am calling the Gang of Four Jam (an original recipe)... as mentioned, I woke up one morning with this idea, remembering that as well as the stashed strawberries, there is a very small bag of red currants in the freezer, from the young currant bush in my front yard. According to my reading, redcurrants are quite high in pectin, and would be a good addition to strawberry rhubarb, plus there were the last of the blood oranges still sitting in the fruit basket. All of these can be water-bath processed, so I figured it was okay to follow my imagination.

Gang of 4 Jam - ingredients (by weight)
I cut up the strawberries in halves or quarters, picked over the redcurrants to make certain that there were no little bits of stem left, chopped the rhubarb rather finely into about ⅜" cubes, and first zested the blood oranges, then squeezed and added the deep red juice. I then added a pound and a half of sugar to the bowl, stirred it up, and left it to start dissolving and drawing out the fruit juices. 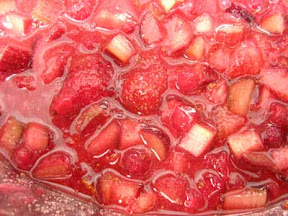 After a bit , when I'd finished the waterbath canning of the other jams, I dumped the mixture into a pan and started boiling it down into jam. It never did reach 220F, but seemed quite ready at 218F, and a bit leary of another batch of toffee, I decided to go ahead and process it. According to the National Center for Food Preservation, rhubarb should be processed for 15 minutes, the same for fruit purees, so that is what I did... 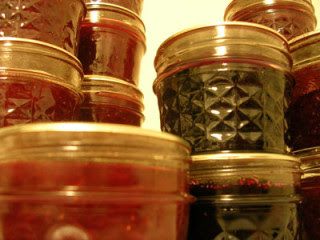 And of course it is necessary to do a tiny taste test, with tea and toast... 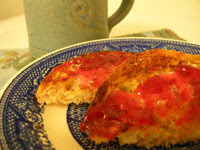 Gang-of-4 is much brighter in color, with a more jamlike texture. The redcurrant made a HUGE difference, the natural pectins let the mixture get to a setting point far more quickly. The strawberry rhubarb is significantly darker, having cooked much longer to thicken. They are both delicious.
Posted by Alison at 3:52 PM