in which our plucky heroine made it through another week in seclusion...

I haven't a lot to say right now, the isolation combined with the heat of summer is wearing on me. 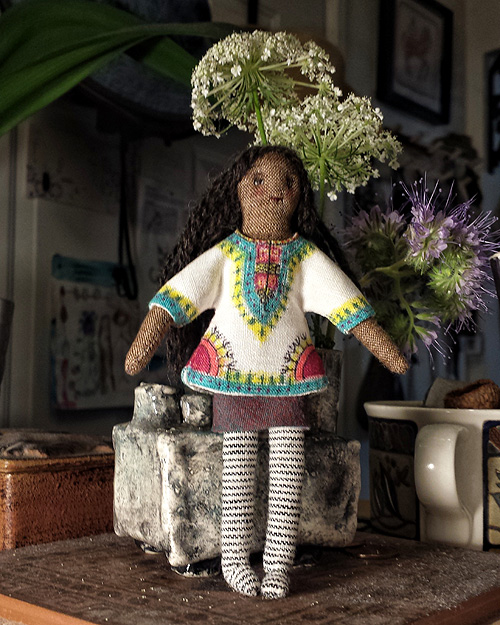 this month in the Tiny Rag Doll World group on Ravelry, the challenge theme was "historical or traditional clothing"... since Nandina already has a Viking Age set of clothes, I decided instead on the 1960's. I decided that these were her mom Kenya Ogidni’s clothes (saved from her own younger days) - a dashiki and a miniskirt.

I used the pattern for Dawn’s Short Sleeve Blouse as a starting point, and then altered it to have longer sleeves and be tunic length. I sewed it from thin white linen, and the fun part was looking at lots of different images of dashiki fabric online and using my collection of sharpie pens to draw on the shirt to get a suitable effect. I colored the fabric after I turned the top to the right side and pressed it, but while it was still flat, before I stitched up the underarm seam.
The big challenge with the sharpie markers is that the ink sort of “wicks” into the fabric, which makes it a bit difficult to control, and makes a lot of the edges sort of blurry. I have three different sizes/types of sharpies, the regular “fine point” ones, the “brush” markers, and a few of the “extra fine point” ones. The good thing about the sharpie markers is that the ink is alcohol based, so that it will not run if it gets wet, and if you use a really light touch, it is possible to use one marker over another. I did that to the color of the red quarter circles, and then to add the black really fine lines of decoration.
※※※
have some lovely pleasant sounds for today:
" Mickey Hart is an American percussionist and musicologist. He is best known as one of the two drummers of the rock band Grateful Dead. He was a member of the Grateful Dead from September 1967 until February 1971, and again from October 1974 until their final show in July 1995. He and fellow Dead drummer Bill Kreutzmann earned the nickname "the rhythm devils". "
※※※ 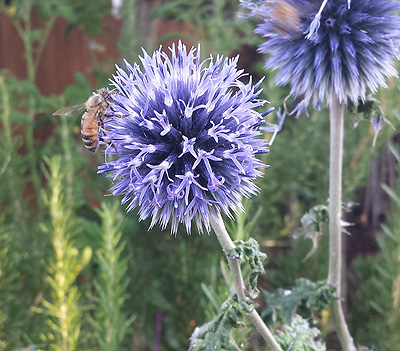 there were two bees, but one flew away...
※※※

this seems like useful mental self-care information... "Move Over, Love Languages: Do You Know Your ‘Route of Safety’?"
※※※

a sweet little fun aside : "A Parrot Needs A Box Fort"
※※※

today's gratitude - homegrown tomato goodness! I had the best BLT supper ever tonight - a large Oregon Spring tomato, warm from the backyard sunlight and deep red, almost as big as my (albeit rather tiny) palm, sliced onto some local sourdough toast, with some bacon pulled from the depths of the chest freezer where I stored it away in March (from the massive pre-pandemic shopping trip) knowing that there might be summer tomatoes.