In which our plucky heroine discovers, as so many have before me, that the antidote for an excess of insomnia is caffeine... indeed, with a very modest amount of elixir it is possible to almost return to a former state of sassy selfhood... the rising curve before the crash... Spring is almost here, and this morning, there were goldfinches down the street, with their distinctive swooping curl of flight and golden feathers almost as bright as the daffodils splashed all round.
≈ : ♥ : ≈
Bit by bit various projects are completed, and with luck the next few days will continue the productivity. A puzzleball is a fun baby toy, (also sometimes made as a pincushion), but is currently intended as an addition to the almost finished box-o-goodies. It looks somewhat complicated, but is actually an simple, if slow, bit of handwork (easier to hand stitch than to do all those intersecting curves on the machine 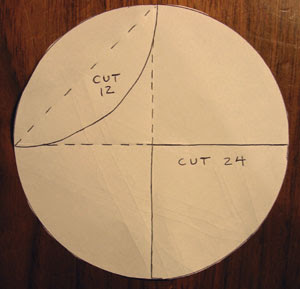 The first step is to make a pattern, tracing round something circular that is a little bigger than the desired finished sphere (the lid to a quart yoghurt container was just about right). Fold that circle in quarters, to get the side pattern piece, and then fold the curved edge down along a line between the quarter-marks, to get the leaf-shaped outer piece. 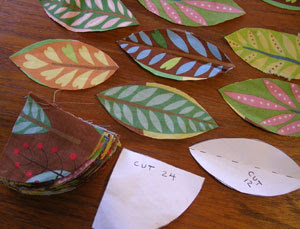 Cut 12 of the outer pieces and 24 of the side pieces. Stitch side pieces to the outer ones, curved edge to curved edge, and stitch up one side of the straight edge of the side pieces. Turn and stuff the little quadrant, and stitch the open side up. Make 12 stuffed quadrant pieces. I like to hand stitch these, using a combination of backstitch and running stitch for most of the seams, about an eighth of an inch in from the edge, then use a close small overcast stitch to close them. 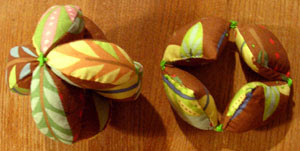 To assemble the puzzleball, slide the "solid" disc through the slotted disc, to form an X and Y axis. Then work the remaining disc, the one only attached at the edges, into position on the Z axis, and turn the pointy corners of the four little cushions towards the center. 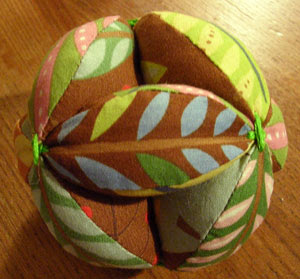 Ta-da!! It should now resemble a sphere, and is both easy to grab with little baby hands, and a soft thing to roll back and forth when baby is bigger. The puzzleball can be left in the configuration that can be disassembled, which makes washing it easier, or the intersections can be further embroidered or embellished. I have seen pincushions with decorative buttons sewed on all the joining spots, but for a baby toy, simple and not swallowable is best.
≈ : ♥ : ≈ 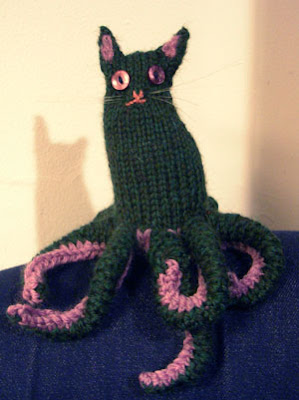 the upper half is a lovely cat,
and the bottom half is all cephalopod;
yes - it is an octo-puss!
Posted by Alison at 10:20 PM