in which our plucky heroine cooks and cleans and fixes things...

but the real treat for today, that I've been saving for a workday, was listening to the new episode of "Cast On". Brenda Dayne returns to podcasting. She was the very first podcast I listened to, and I didn't realise that I was spoiled until I tried to find another favorite when she moved on... She has a lovely voice, a niche topic, and intersperses her presentation with bits of music, interviews and commentary in a way that is a sort of delightfully rich fruitcake of an interlude (assuming one loves good fruitcake as much as I do). And... at the end of the month... she is going to start a second podcast inspired by A Pattern Language, and how she is applying those concepts to her own home. I can't wait. I have loved the work of Christopher Alexander for years...

The window screen handles I ordered from Ebay arrived this weekend, and today I was able to repair one screen from the kitchen window... peel away the spline, attach the handles, re-insert the spline, and then scrub the screen thoroughly in the bathtub with the scrub brush. The screen is now clipped to the clothesline to dry overnight, and I can replace it in the window tomorrow. Now I have a half dozen spare screen handles, which is good, since they will eventually come in handy.
※※※ 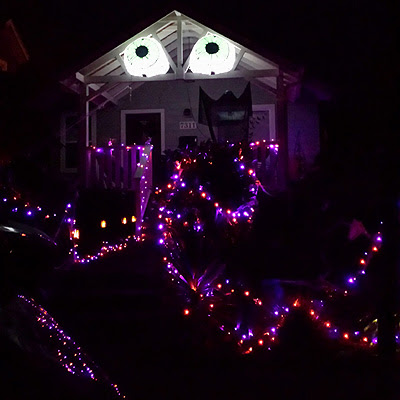 the lights continually shift from orange to purple, and flash in different sequences and patterns, while the giant eyeballs watch over the street...
※※※

Five flavor eggplant freezes well; it was a treat to have on hand while I was recovering from periodontal surgery this spring, as it was of suitable consistency, but intensely flavorful. Indeed, it is a treat to have on hand at all, and I cooked up the rest of the eight pounds today, had another easy dinner, and the rest is in ziplocs in the freezer for future meals.

put the salt in a big bowl, add several cups of water, and then clean and cut up eggplants, tossing the bits into the bowl of salt water - I cut them first the long ways into quarters or sixths, then cut the long pieces into chunks. I try for about ¾" cubes more or less by volume, because big pieces take a long time to cook through, and undercooked eggplant is nasty.

when all the eggplant is in the bowl of salty water, it sits there for a half hour... I occasionally stir it or push the chunks around to make sure they all get drenched... you want to have enough water that they are all floating.

Meanwhile, combine the tamari, the vinegar, the sugar, and the cornstarch. Drain and dry the eggplant bits. (my current innovation is to use my salad spinner after pouring off as much of the water as I can)

In a big frying pan, heat up the oil, then fry the eggplant until it is FULLY COOKED and slightly browned. (Trust me, you want it cooked till it is SOFT, not al dente) Pour the sauce mixture over the eggplant (give the sauce mixture a good stirring up just before you pour it), and cook til thick, which will take only a few moments, because cornstarch...

At this point, I usually add some awesome sauce (spicy chili jam) but you could add a dash of tabasco, or sriacha, or whatever you prefer. The original recipe called for adding jalapeno peppers at the beginning, but that was WAY TOO HOT for me. YMMV, and the spicy aspect is entirely optional for that matter.

Truly, this recipe is almost faster to cook than to read, most of the effort is in cutting up the eggplants, and in waiting while they soak in the salty water. I had always in the past done the sprinkle the eggplant with salt, let it drain, rinse it off thing, which is a whole lot of faffing about. I had never heard of soaking them in lightly salted water, but it works really well!!
Tonight's dinner was some of the eggplant, along with some rice and some heated up Trader Joe's frozen teriyaki chicken pieces (sans sauce, the eggplant is flavorful enough without adding anything else) 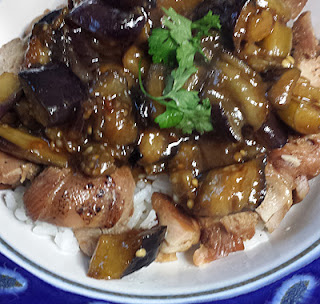 today's gratitude - somewhere, a farm grew the eggplants, and last Saturday a woman chose to pick them and bring them to the elementary school and serendipity brought me to where they could be found, and now I have good food
Posted by Alison at 10:45 PM No comments:

in which our plucky heroine maintains a modicum of forward momentum...

This time of year is, in part, all about pruning. There are dry days interspersed with (hopefully) the coming rains of wintertime. I have done a bit more apple tree pruning, and am thinking that acquiring a pruning saw might be a good idea, there is only so much that can be done with my loppers, and my trusty Felco. It is always necessary to cut back euphorbia, that one four inch plant fifteen years ago has done well for itself, and scattered offspring all over the landscape.

I noticed after the first rainy day that the side yard ferns, volunteers all, had greatly overgrown the walkway and would prove to soak my legs all winter long if I did not Do Something. There was much cutting back, and I discovered that the scratchy bracken? left my hands and arms very itchy indeed. Time to get started on my DIY work gloves project!
※※※ 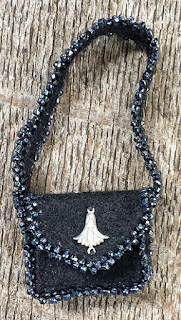 So, this weeks Tiny Rag Doll Nation challenge was "accessory", and after much thought, I decided that my little friends needed some tiny tote bags...

I was inspired by this exquisitely beaded 19th C Seneca figurine from the Metropolitan Museum. Years ago I did a lot of bead embroidery, and I still have a lot of supplies. Some faceted black seed beads were stitched as a decorative border around all the edges of a little felt tote bag; I modified the size and shape of the Ann Wood satchel pattern to add a flap, making it more like a messenger bag. 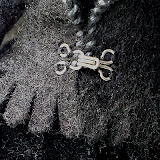 It took most of two evenings of peaceful sewing to stitch the beadwork, and when I was done, I decided to add a little metal lotus blossom to help weigh down the outer flap, so it would stay closed. While rootling around in the bead bucket I found some vintage hooks and eyes, and it occurred to me that they would make a very suitable closure for Xanthy's waistcoat: 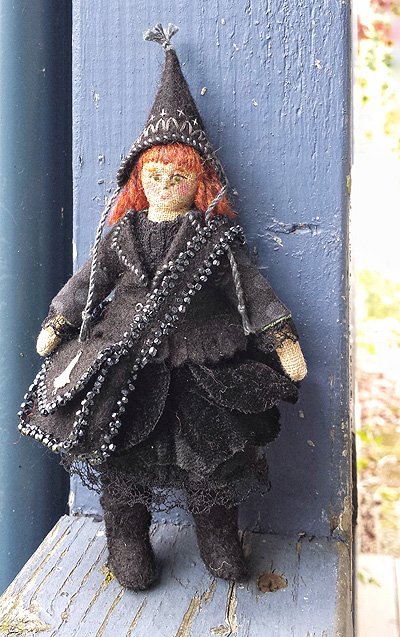 I think that Xanthy looks ready for whatever they may find out there, and since they are not wanting to give the black boots back to Nandina I had best be busy about making some new boots for her, and a tote bag for her as well!

※※※
I've been reading up about figs and persimmons, how to prune them properly for better fruit set and a healthier tree. One thing at a time, but the tasks, and the learning, never end... Am considering starting a hard copy notebook of yard/garden/food plant info for reference.
The squirrels this year are becoming truly pesty, going bonkers digging holes in any soft dirt they can find. This week I built a new taller barrier for the salad table, using the long straight shoots from pruning the apple tree, and once I get the bird netting properly stapled in place it should serve all winter. I planted the greens that were sent to me, mostly kales with a few lettuces, and the determined purple shiso, which I have been using to flavor a jar of vinegar. 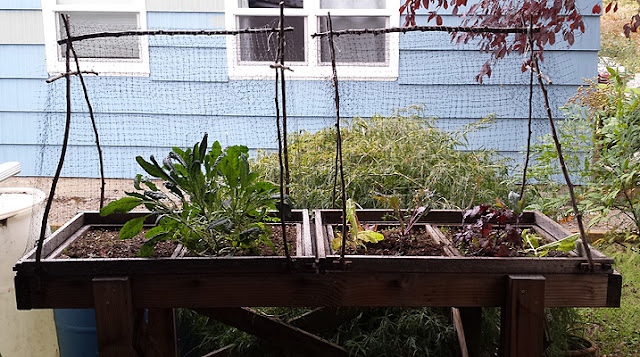 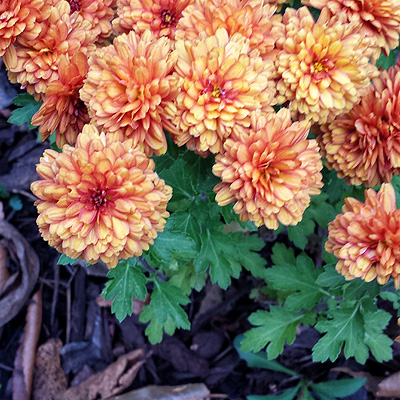 today's gratitude - a surprise watercolor paintbox tin showed up here from Amazon, with no indication as to who had sent it... further queries eventually turned up that my artist pal Marya was the generous source of this new inspiration... I shall have to clear away enough space on one table or t'other to do some painting!
Posted by Alison at 11:04 PM 1 comment:

in which our plucky heroine keeps busy in the kitchen...

The beginning of the week felt rough, in part the combination of not getting outside for walks because rain, and intense feelings of both missing my friends IRL, and a wave of despair about the timeline we are living in. As I cannot change much, am trying instead to focus on the small bits of world that are under my hands...
※※※ 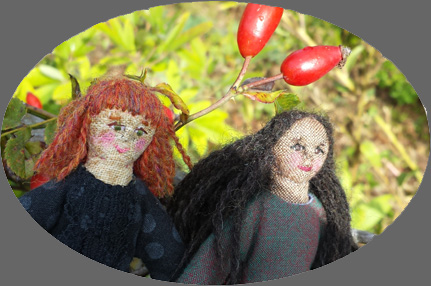 Xanthy and Nandina came with my on my morning walk today. Last week I added a bit more detailing to their eyes and faces, and today I played with Photoshop to do something different with the crop and process images than what I usually do...
※※※

I made tomato sauce yesterday, (storing tomatoes in the freezer makes for easy peeling, but takes up a lot of space, multiple spheres not being very compact) 10# = eight jars for the pantry and there was just about two tablespoons left in the pan, so I made "kiddo pizza" as a snack. Toasted a slice of sourdough bread, spread it with the leftover sauce, and sprinkled it with grated cheese... microwave to melt, and eat it up yum! (I can't eat commercial tomato products, so homemade sauce is a real treat. Now there will be some tomato based meals this winter)

sometimes you just need to listen, and the world will tell you what you need to hear next...

※※※
Gradually working through various seasonal preserving tasks, as best as can be managed given the shortages of canning supplies. I want more applesauce for certain, and more marmalade. 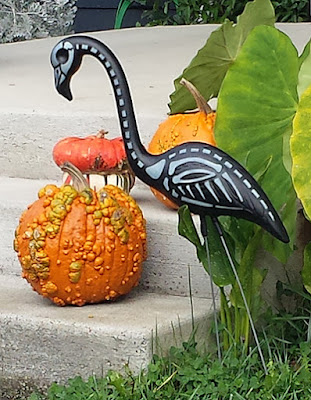 today's gratitude - online acquaintances who share music I would otherwise not likely hear, that is wonderful..
Posted by Alison at 5:09 PM No comments: